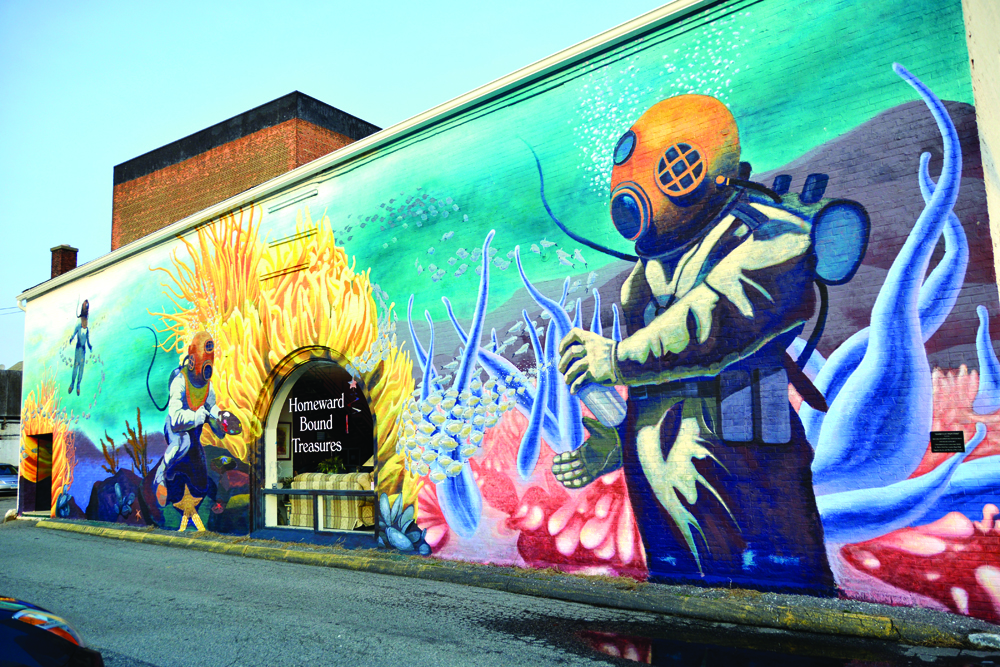 The buildings that dot the downtown corridor of New London are beginning to come alive. The backside of some forgotten brick and mortar is now covered in color and imagination, fantasy, and nostalgia.  A walk that begins on Eugene O’Neill Drive is no longer just a straight shot from point A to point B, but now rather a stroll that will have visitors stopping to marvel at the transformation of a one-way thoroughfare. Until a year ago, this was your usual urban street with its historic buildings overshadowed by commercial real estate, whose signs and billboards signified that life in this seaside city was typical.

The Wall to Wall New London Mural Walk currently has sixteen completed murals that line not only the main drags of Union, Bank, and State, but now dip into the inner sanctuaries of the side streets of Golden and Green.  There’s something magical about turning a corner on what might appear to be an alleyway that hopefully leads to something populated and safe, realizing that it has been beautified and redeemed with the careful attention of an artist’s brush and the commitment of a city dedicated to preserving its history.

While New London has always been a hub of artistic activity since the Hygienic Art Cooperative came into existence, the recent infusion of the Mural Walk has helped to revive areas of the city that may have otherwise given into urban decay.

A. Vincent Scarano, president of the Hygienic, explains how the project came to fruition.  “We received a call from the Department of Economic and Community Development who had taken over the Arts Commission in Hartford. They had money to spend on public works of art, and they were brainstorming on how to spend this money on art projects. So what they did was  gather all these art aficionados from all over the state, and the only group selected from New London was the Hygienic,” Scarano explains.  At the roundtable with the commission, the Hygienic representatives suggested the idea of public works of art in the form of murals; with them they brought mock ups done by artists who had originally worked on the original Hygienic murals.  “We wanted to show them that public works of art and outdoor galleries are a wonderful way to incite economic growth in a city.”

Some time passed, but eventually the Commission organized, and the project titled City Canvases, went into effect.  It was billed as a competitive project that would involve ten cities and would, over the course of the project, disperse over a million dollars to bring public works of art to the outside facades of these cities’ buildings.  One of the more perplexing aspects of the project was the time crunch.  According to Scarano, everything had to be done quickly.  “We got the word that we received the grant, and we had artists submit proposals in a two week time frame.  This project had to be completed by June 30th; and it had to be tremendously successful, so we were in a time crunch, considering we had to choose the artists and get five huge murals painted in two months time. It was crazy.”

On this late winter afternoon I meet with three of the artists involved with the project.  Russ Kramer, the artist who organized the One Place, Many Cultures mural says that this project was a scheduling nightmare in some respects, but one that in the end was worth it.  “My concept was a mural of New Londoners by New Londoners. It was a grid of faces, with 26 faces total, so I essentially put together an alliance of  about 20 artists, to each do one square.  Everyone was really enthusiastic, and it was a way for me to get more artists involved in the project.  The toughest part ended up being who could paint on what day and at what time.  You remember we only had a very short window of time to complete it, and we had to account for weather and such.”  Kramer and his alliance of artists completed the back wall of the Hygienic stage that faces, what could be described at best, a nondescript parking lot for the city’s businesses on Bank Street.  Now what greets people when they pull into the two block length strip of parking spaces is a mural depicting the many faces and characters that comprise the downtown landscape.  “We obviously chose to include some historic figures such as Eugene O’Neill and Nathan Hale, but more important for me was  to show the diversity that is New London; and if you notice, the mural is such a cross section of humanity. That was the message that was important when I was thinking about this concept.  The fact that this city is so diverse with so many cultures all occupying the same place,” Kramer explains.

New London’s art scene is not limited to its visual artists.  The music scene in New London has always been a vibrant part of the city’s identity, and Caruso Music has been providing musicians with the tools of the trade for decades.  Caruso Music takes up the  corner of State and Eugene O’Neill Drive, which is why artists, Qimin Liu and Mark McKee felt it befitting to choose the Caruso wall to compose their Songs of Our City mural. “We knew that New London was known for its deep roots in the visual arts community, but we also knew how much the music plays a part in this town. I had done a mural in Philadelphia that highlighted musicians and dancers, so I knew that I wanted to work on the mural that would show how important the music is to this city,” Liu explains.  The Songs of Our City mural is 80ft long and depicts the music of the many cultures and genres, from the jazz saxophonist and the classical cellist, to the Spanish guitar and the beats of the conga drums.  Liu and McKee were able to elicit the help of students from the Lyme Academy of Fine Arts in order to complete this enormous project within the constraints of the time frame.  “I wanted to be able to use the students from the community because the whole project is about the community,” Liu adds.  And while they may have had the manpower to get this wall done, Liu and Mckee had one of the more difficult surfaces with which to contend. With its bricks broken and chipped in many places, the actual surface had to be readied before any of the art work could begin.  “It was difficult going into it because not only did we have surfaces that needed mending, we had so much rain you could only work during certain hours and on certain days,” he said.

A similar situation faced artists Troy Zaushny and Michael McNabney who are responsible for the insanely detailed work that is the Hard Hat Painters.  “Because of the rain we actually started a couple weeks later; and at that point we were just chomping at the bit,” Zaushny recalled.“We would literally go out there and paint for an hour, right up to the moment when the clouds rolled in, and then of course we’d have to go back the next day and paint out all the drips.”  Zaushny is able now to look back at the experience with a bit of humor and perspective but he remembers feeling the heat of the deadline beating down his neck.  “Michael and I actually finished the night before it had to be done. We were out there in the dark with the headlights shining on the mural, painting away and filling in the details.  Zaushny and McNabney also had the help of local artists to keep that sense of community at the forefront of the project, but at the end of the day it was their design and work on the line. With their attention to, and addition of specific details, they were not only under the pressure of the project’s deadline, but at the mercy of Mother Nature.  While all the artists had been sweating toward the end, they accomplished what they set out to do; so when the Governor came down on the 30th of June, he was able to dedicate the murals on time.  Not a small feat considering the artistry of these paintings.  The Mural Walk stands as a true labor of love by those who understand the importance of keeping the arts alive.

According to Scarano, the Mural Walk has transformed an entire section of the city and the canvases have inspired conversation and have made it so that people linger on the sidewalk and take their time getting back to the parking lot. “It’s amazing because we have had interviews with people on the street who all of a sudden started coming around because this happened. There was life on the street in that particular section of town,    initiating conversation and this genuine humanistic feeling,” he explained.

The arts have a tendency to not only illustrate the human condition, but more importantly help to connect us with each other through the emotional responses we innately have when we see, touch, or hear something pleasurable. It is for this reason that the artists and community members of New London are hoping to continue to beautify the backdrops and buildings of this city, thereby bringing light and color to the lives of those who inhabit its landscape.

Get a preview of the Wall to Wall Mural Walk:  www.hygienic.org

• Jeans Built Around You. Hartford Denim