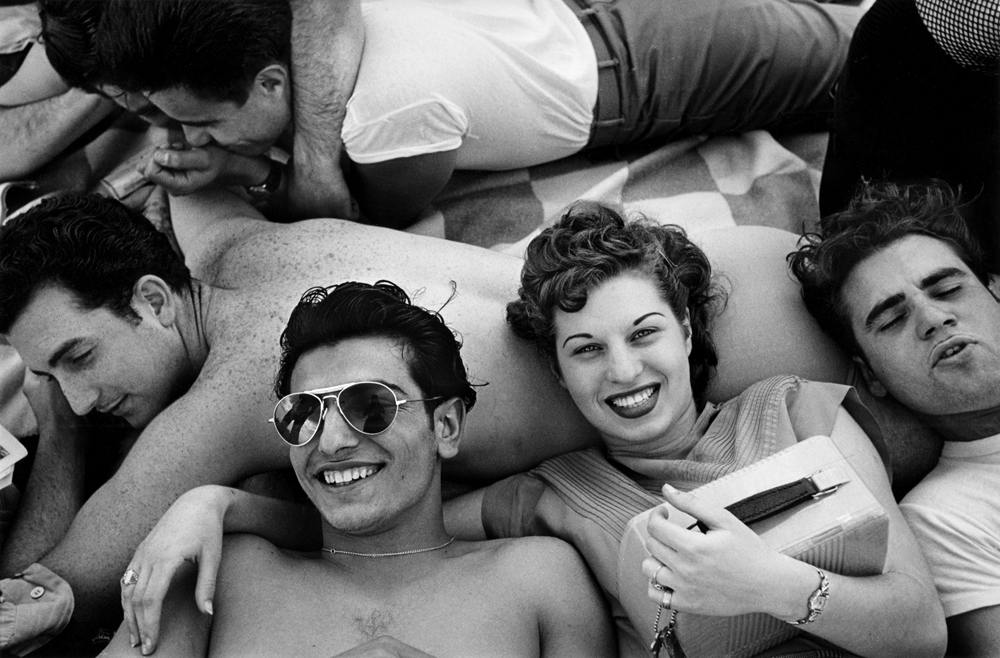 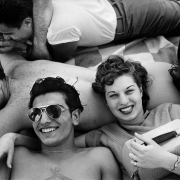 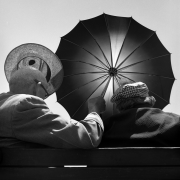 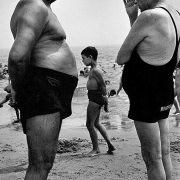 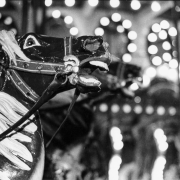 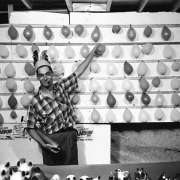 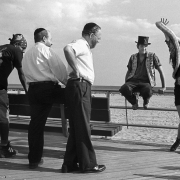 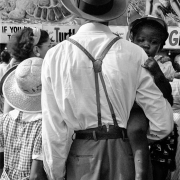 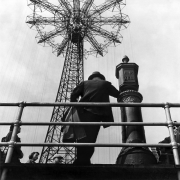 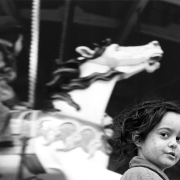 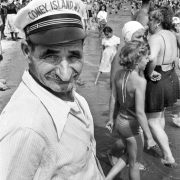 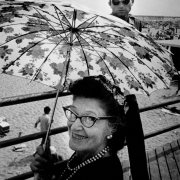 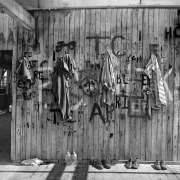 The legendary photography of Harold Feinstein: ” Love from Coney Island “ 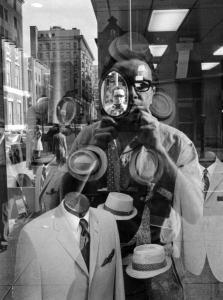 “Man in the Mirror” self-portrait

Sparked by exploding brilliance, “Coney Island: Visions of an American Dreamland” at the Wadsworth Atheneum of Art, ignited the imagination of Curator, Robin Jaffee Frank during her tenure at theYale University Art Gallery.It was an epic proposition, propelled by the dazzling momentum that has sustained Coney Island as a cultural fixture since 1880.  Encouraged by her colleagues, Jaffee Frank ferried the project along when she moved to the Wadsworth, where she is now Chief Curator and Krieble Curator of American Paintings and Sculpture.

The work began in earnest and the undertaking thrived, culminating in this on-point exhibition’s premier earlier this year. Jaffee Frank takes you to the Boardwalk and back, compiling a staggering chronicle of photographic and artistic masterworks juxtaposed with authentic carousel horses and illuminated signage, sound bytes, and ephemera. The weight of humanity against scorching sand  screams from the Cyclone, and long shadows of the Boardwalk on a morphing social backdrop transforms visitors into virtual tourists. A bite of a Nathan’s hotdog with a smear of mustard tantalizes, just out of reach.

Coney Island was a break from reality for millions since exploding into the American culture at the back end of the 19th century. Seduced by fantasy, decades of visionaries elbow to elbow with the masses,were mastering the moment. Some cast indelible impressions. Artists like Reginald Marsh, Milton Avery, and Red Grooms; filmmakers such as Woody Allen and Paul Mazursky; writers from Walt Whitman to Henry Miller; Beat poets and musicians were collectively transfixed and transformed.

Photographers created the strongest statements. The spontaneity of this evolving art formed thousands of jump-cut impressions: of people and place, abundance and scarcity. Picture makers like Robert Frank, Bruce Davidson, and Weegee were galvanized, converging on Coney Island to snap the shutter with varying success.

One visionary is transcendent. Iconoclast and Master Photographer Harold Feinstein innately comprehends the essence of Coney Island with lifeblood coursing through his veins. Feinstein captures the texture and intimate moments purely and precisely with reverence and adoration. His work eclipses the snark and showmanship of other photographers, mesmerizing seven decades of discerning critics.

Born at Coney Island Hospital to immigrant parents who celebrated education and art, Feinstein, now in his 84th year, began a symbiotic relationship with his “Treasure Island “as a kid:  “I often feel like I fell out of my mother’s womb onto the beach in Coney Island with a Nathan’s hot dog in my hand; the sounds of the girls screaming on the Cyclone.”

His father palmed him a quarter, setting him free to explore the world’s most fantastical playground.  “It was a place I gravitated to,snuck off to, found  myself in, and  lost myself within. It was bigger than me, and that was never a problem. I was glad  for the impact or lack of impact it had on me.”

This childhood fascination with the human condition was why Feinstein became a photographer: “My declaration of purpose as a photographer was to show life as it is, and Coney Island was the perfect place to discover this.”  Immersed in this motion, passion, and fervor, Feinstein’s humanist vision was shaped through the innocent lens of a $5 per day rented Rolleiflex – a ton of money in those days – begged from his upstairs neighbor, Turk.

Feinstein took risks. With uncanny precision, his Boardwalk snapshots catapulted the 15-year old into titanic notoriety and a permanent affair with the lens. At 18,  he was the youngest member of the elite and controversial Photo League, which made McCarthy’s blacklist one year later in 1950.

He persuaded arts patron Dorothy Norman, who engaged in a long term affair with Georgia O’Keefe’s husband, Alfred Steiglitz, to critique his work: “You’re young, but you will go far because you have awe. This is the password to wisdom.”

Norman’s encouragement sent him to Edward Steichen, legendary Director of Photography at the Museum of Modern Art. Steichen took a shine to this confident kid and purchased two of his photographs in 1950, making Harold the youngest artist ever to be included in MoMA’s permanent collection. “Two Boys on Pier, 1950” and “Two Men Walking on the Beach, 1950” officially launched Feinstein’s career, sending his Cyclone into the stratosphere.

In 1957, the young Feinstein set the NY art scene on end with an impressive eight day sale of photographs, moving the public with a haunting shot of a vacant carousel horse. The sale also moved 400 prints at an unprecedented $1, 200 – the equivalent of $10, 000 today. In Joseph Deschin’s effusive NY Times review, a visitor responded to the show with awe, “You let us into your life.”

Seven decades later, Harold Feinstein’s life remains open to inquiry, albeit by invitation.With the Wadsworth exhibition dark and on to San Diego, many questions linger within Feinstein’s images. The answers are revealed by the photographer and love of his life, his wife Judith Thompson.

Just north of Boston, Merrimac, Massachusetts is a galaxy away from Feinstein’s Coney Island. A clutter of frame and brick in the colonial village radiates rural. Judith is waiting at the bottom of the steep driveway to welcome the car, joined by a soft yellow dog. Vibrant and graceful, you’d take her for a ballerina. It’s a ruse. Harold’s charming wife is a PhD in Peace Studies and Radcliffe Institute Peace Fellow. Judith Thompson possesses her own notoriety in the arena of global human rights and peace organization. She directed the internationally award winning, “Children of War,”and is now Director of the Harold Feinstein Photography Trust. Sharing the wonder of the human condition, the two have been inseparable since 1987 after Harold did her astrological chart, realizing they were fated to be together:”The secret to happiness is doing the work that you love, and living with someone you love.”

The country house is an embrace with a fieldstone fireplace, Buddha on the hearth and soft places to curl up. The walls are filled with Harold’s photographs, the images you know you’ve seen before.  THAT’S who shot the yellow roses on Oprah’s book cover; THOSE are the flowers and butterflies reproduced en masse for IKEA. Are those the Coney Island photos in MoMA’s permanent collection?  The originals glow. Harold is sitting at the dining room table with the loving smile he probably smiled at everything he’s ever seen. He loves that you’re impressed, taking you in as you take in his work, the photographer’s eye still reflexive. There are photo boxes open on the table with prints splayed across the surface, portraits of models, the later Cubist Metroplex series, and stacks of newly rediscovered work. His brilliance is expressed in stream of consciousness as he continues to watch his visitor’s reaction.”When your mouth drops open, you click the shutter. That’s it.” Feinstein is calm and abundantly generous, making creativity seem magically simple.

You wonder if it was always that way – when he was shooting photos overseas during the Korean War.  “It was a blessing in disguise. When they drafted me, I asked to go into photography. Instead they put me in the infantry. If I had been an official photographer, I would have been photographing all the medal awards and formal shots. In the infantry, I carried a camera along on the troop ship, on the ground.” The intimacy of Coney Island is reflected in all of his work. Many photographs such as “Bidding Farewell at Camp Kilmer, 1952” were poignant love stories about soldiers heading off to war. This quality was noted by Philip Proger, Curator of the National Portrait Gallery, London. “Indeed, there is something of the spirit of Coney Island in Harold’s Korea. The hopes and fears, longing and even happiness written on the faces of Feinstein’s Coney Island visitors appear on the faces of the young draftee. It is hardly a coincidence, for these are the same men and boys who, in a time of peace, would be sunning themselves on a beach or be visiting a boardwalk sideshow.”

There is a remarkable story behind every camera and every photograph. The Leica C3 Feinstein took to Korea was purchased by photojournalist W. Eugene Smith – “the most beautiful person I’ve known” – who double-parked a cab to buy it. Smith remained his mentor and exemplar for courage in picture taking. They worked together on the epic “Pittsburgh Essay,” now residing at the Center for Creative Photography in Tucson.

Jazz was another adventure for Harold: “When I got out of the army, I moved to the Jazz Loft in Manhattan. … the other loft was cut in half by Hall Overton, the classical composer. I was listening to the best jazz musicians in the world playing opposite this very thin wall: Monk, Miles, Sonny Rollins, John Coltrane. Blue Note Records and Signal hired me for covers and layouts.”

Feinstein was equally recognized for legendary teaching and was one of the first Teaching Fellows at Philadelphia’s Annenberg School of Communications: “I love anybody who wants to be a photographer… they’d put down $250 to learn to make a picture. The odds are it’s not going to earn them a living. It’s not going to make their marriage any better, although it might. So why? That’s sacred stuff. It’s the stuff we do for the love of it. And that’s the essence. That’s the flame you want to blow on.  I think students come in with a spark, and I want to blow on it and burst it into flame.”

Harold Feinstein’s flame continues to burn. It’s been a busy few years.There was the two person show at Lumière Gallery in Atlanta, the Retrospective of Harold’s work at Lumière Gallery in Moscow co-sponsored by Harper’s Bazaar, plus the Coney Island exhibition. There are a myriad of his books in print, a robust website, and an active blog. Newly discovered images are continuously being re-examined and printed, with a Kickstarter campaign in motion, launching many exciting projects. The inspiration behind Feinstein’s perennial lens prove creativity is timeless.