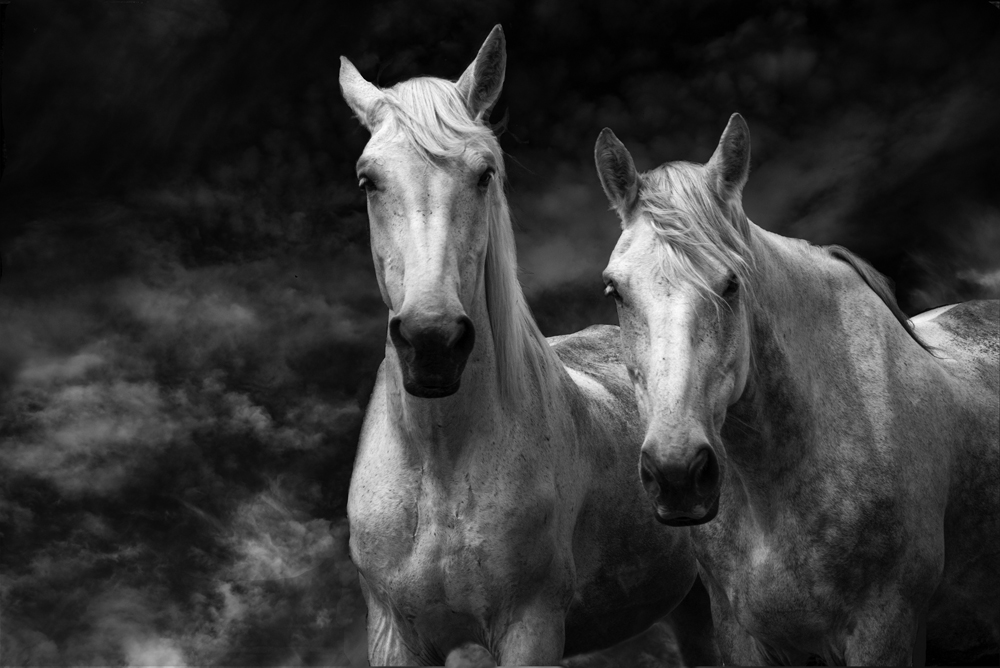 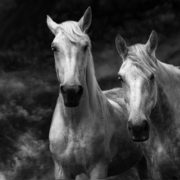 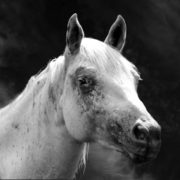 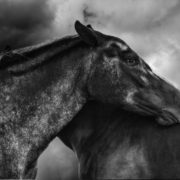 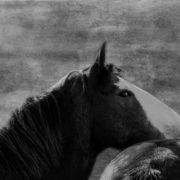 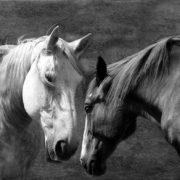 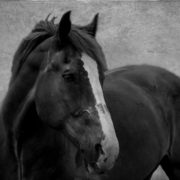 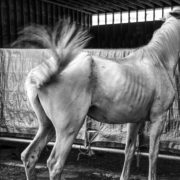 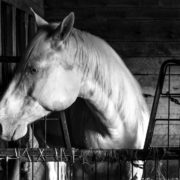 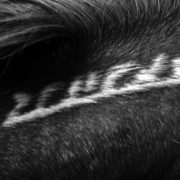 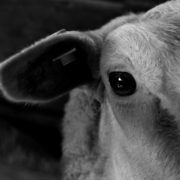 This is a sad, but hopeful story. Sad, because it involves the heart wrenching mistreatment of animals, which is always shocking to hear about given the intelligence and majesty of other species. But this is also a hopeful story because photographer Elin Dolle is shedding light on some of the atrocities afflicting the horse industry through her regal images of these profound creatures.

Like many young girls, Elin Dolle was obsessed with horses. She collected statues and read books on the subject, but it wasn’t until decades later that she transformed her passion into art.

“’I’ve had a camera since I was seven, but it’s been an on-again off-again relationship with photography,” Dolle says.

Dolle took some classes when she was older, but then began a lengthy career as a learning consultant. When she retired 10 years ago, she picked up her camera again. One of her earliest photo essays depicting the natural beauty of the frozen woods and water near her Deep River home, was published in an issue of Black and White, a stunning fine arts magazine.

“Each winter it seems I keep going out there to take photos. I am in awe of how beautiful it is. Although it’s the same snow, it always looks different,” she says.

Dolle liked creating photo essays and decided to enhance her knowledge by taking a course with Debbie Fleming Caffery through Maine Media Workshops. It proved to be life changing. She had to pick a project, so she found a local woman with a sheep farm. Her idea was to photograph the sheep but also tell the story of the woman raising the sheep and the border collies that herded them. She converted some of the sheep pictures into black and white portraits.

“That caused quite a stir. The instructor and other students had not photographed like that before. I love to show the dignity of the animal, not just their beauty. With the sheep you could see it in their eyes. People think of sheep as dumb animals, but they’re really not. I saw dignity there that I wanted others to see,” Dolle says.

Apparently she was successful because her teacher advised her to scrap her original idea and just concentrate on the portraits. Caffery also encouraged her to continue photographing animals. Since Dolle had always loved horses, she decided to start there. She visited Ray of Light Farm, a horse rescue facility in East Haddam, Connecticut, seeking horses to photograph.

“I was wandering around by the barn, and a woman waved at me and asked if I wanted to take a photo of her and the horse she just adopted. His name was Ocho. She said he was a Premarin horse,” Dolle recalls.

Dolle had never heard of a Premarin horse and immediately went online to learn more, which she found applauding. 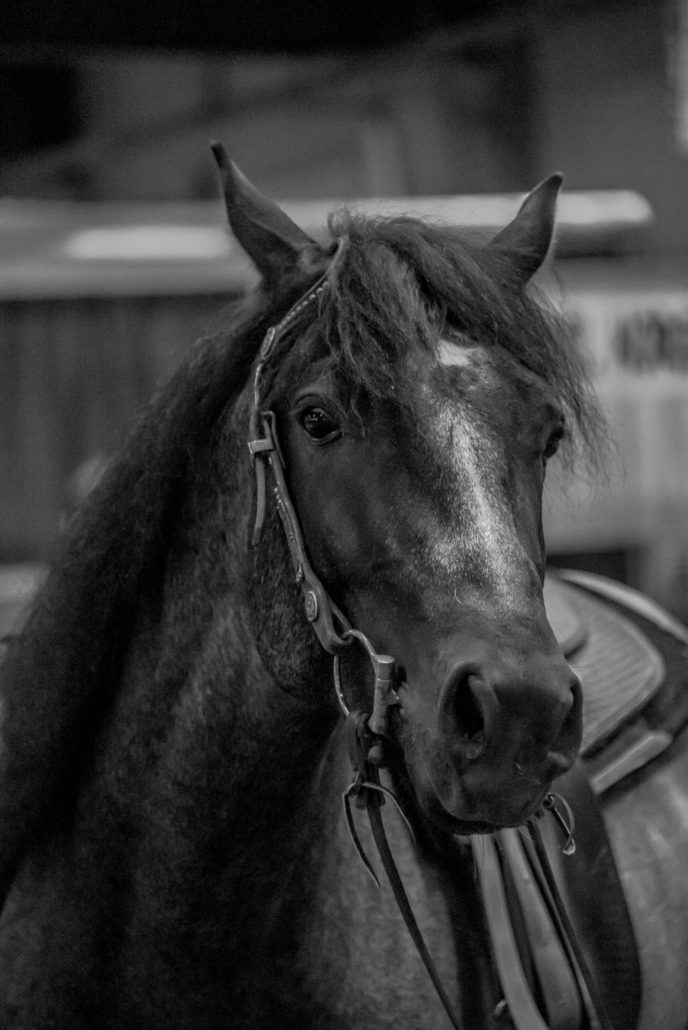 Premarin is manufactured by Wyeth Ayerst, a pharmaceutical company that is now part of Pfizer. It is the brand name for an estrogen medication made from the urine of pregnant mares and used to treat women with menopausal symptoms. It was first marketed in 1942 but is still available even though research has shown an increased risk of endometrial cancer, strokes, heart attacks, blot clots, and breast cancer with use. Thus far, more than 13,000 people have sued Wyeth because of the drug’s harmful effects, and yet the sale from this drug is in the billions.

The other piece of this ghastly puzzle is the manner in which the urine is collected from the mares. Essentially, they are place in stalls so small that they are unable to move or lie down. They remain hooked up to bladder machines for five to six months during their pregnancy while their urine is taken. They are deprived of exercise, fresh air, and adequate food and water and are impregnated annually with no rest. They are let out only when they are ready to give birth. Their foals are either left to die (because why waste valuable money feeding them?), or they are placed in fattening pens for slaughter where their meat is sold to Europe, Japan, and Asia as a delicacy. The mares are then placed back into the pens, and their suffering begins again until they are too old to reproduce – then they too are killed for their meat. Usually this industry uses draft horses because they are big, and bigger means more urine.

“I found this all very disturbing and thought maybe there was something I could do instead of just taking pictures. This story has been told before but it really needs to be told again,” Dolle says.

Since then, Dolle has visited other horse rescue farms in Connecticut and in Maine and discovered a network of dedicated people working tirelessly to get the owners of Premarin ranches to advertise the mares and foals for adoption, as opposed to killing them. In doing this, many horses have been purchased by rescue groups and private individuals that have placed them in sanctuaries or found them good homes. Additionally, after the Women’s Health Initiative published the findings of a study highlighting the risks of Premarin, drug sales declined; and the number of ranches has shrunk from four hundred to thirty.

Dolle has taken hundreds of photos with an emphasis on portraits. She has chosen not to show anything gory because she does not believe it would be a good way to promote adoption. Rather she focuses on the animal’s grace and beauty.

While in search of Premarin horses, Dolle has come across Mustang rescue organizations and has been photographing them as well.

Once federally protected, Mustangs became over populated in the respect that there were too many roaming free on land that farmers and ranchers wanted to utilize. As horse meat became more widely used in the domestic pet food market and overseas as a delicacy, the mustangs were rounded up, transported, and sold to rendering plants. The methods used to capture these wild equines were so brutal, that it inspired thousands upon thousands of letters to Congress from people citing concern for their welfare. As a result, in 1971 Congress passed the Wild Free-Roaming Horses and Burro Act, placing Mustangs and burros under federal jurisdiction to preserve and protect them.

Still, whenever the population exceeds its territory and the health of the land suffers, the horses must be removed. Instead of killing them, there is a mass movement to prepare them for adoption. But caring for a wild horse is vastly different than caring for a domesticated one, and ignorance often results in their maltreatment. Many Mustang rescue centers are educating owners about the special needs of this breed and finding suitable homes to live out their lives for those that do not want to be tamed.

Throughout this project, Dolle has met some extraordinary animals and people that have left an indelible mark.

“They have so much dedication and devote so much of their time to ensuring these horses are happy and healthy and going to a good home. It’s really inspiring. It’s been a very emotional journey for me. I’ve seen the incredible grace and beauty of these animals both inside and out. I’m amazed at their resilience and their willingness to trust in spite of all they’ve been through. I’ve seen horses whose spirit has returned and those who are too broken to have that happen. I’ve heard some very sad and disturbing stories, but I’ve seen many success stories too,” says Dolle.

On The Road With Gigi Horr Liverant
Scroll to top
X