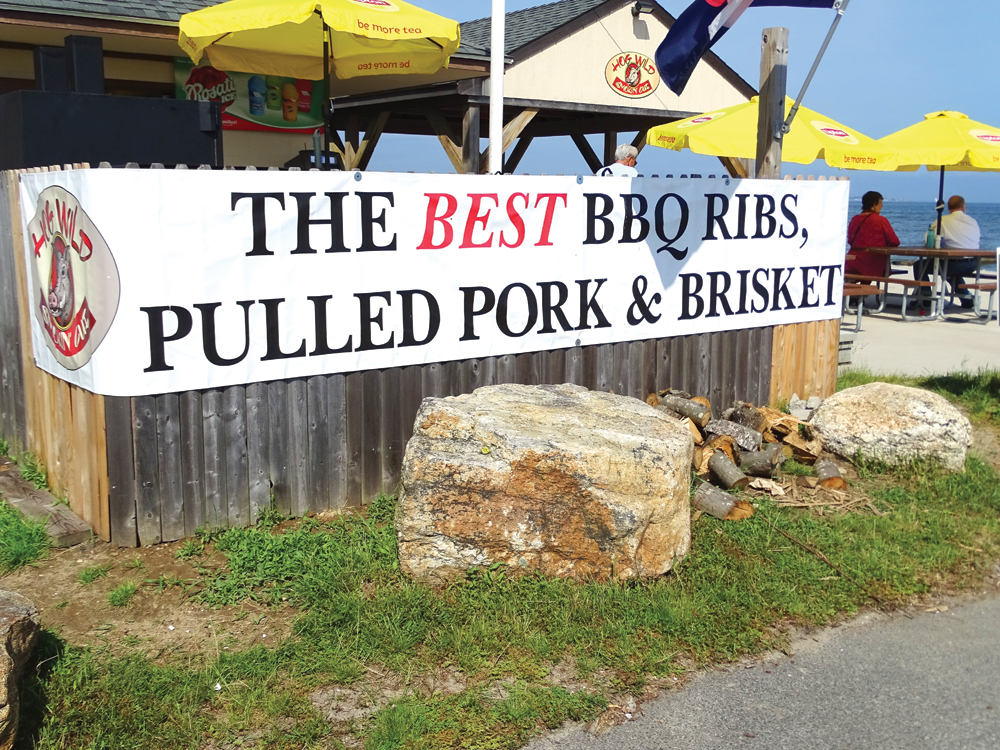 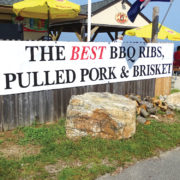 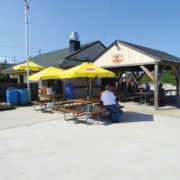 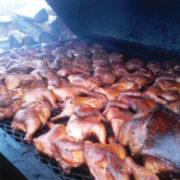 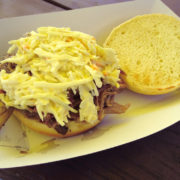 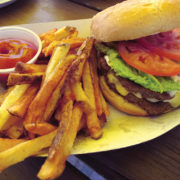 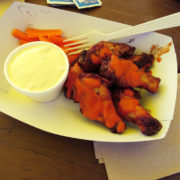 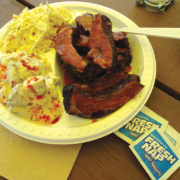 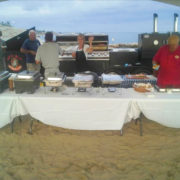 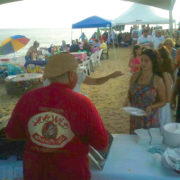 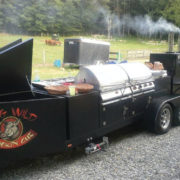 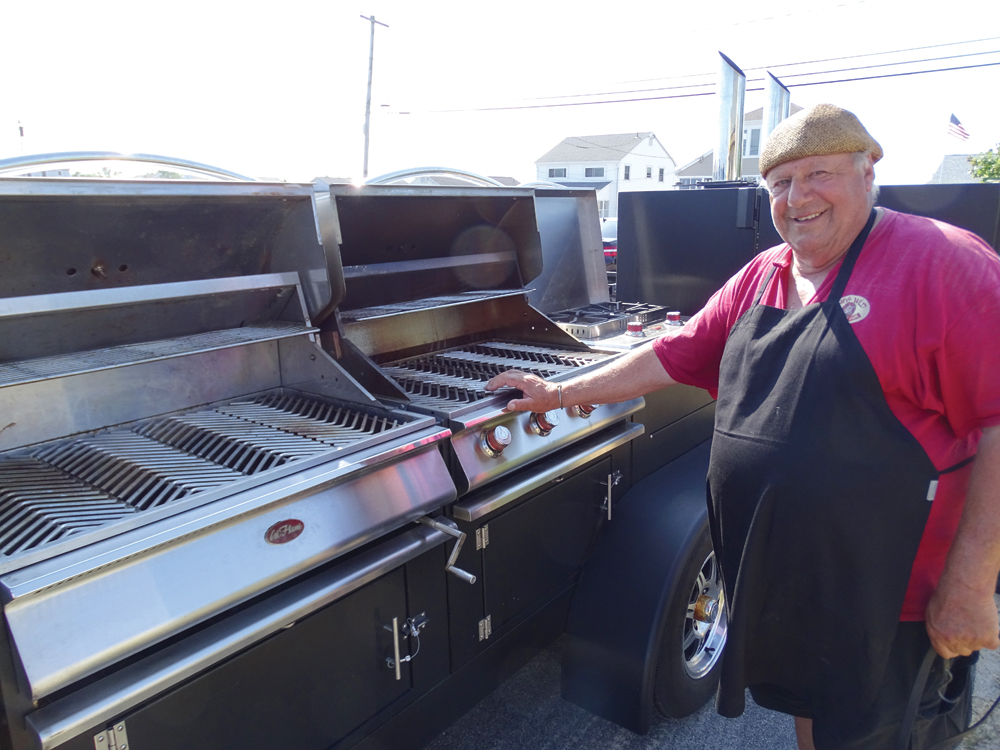 Remember years ago when you packed a lunch for a day at the beach? It might have been egg salad that wound up soaking through the bread in the intense heat, and you had to worry about the mayo turning. So you gave that up and sought out the closest beach stand with greasy food, high prices, and not a lot of choice. Not great either.  Happily now you’ve got a choice; and although we’re tempted not to resort to a cliché, you can simply go hog wild, enjoying some great food in the process.

It’s called Hog Wild Smokin’ Cue; and if you’re in Westbrook, or anywhere near Westbrook Beach, you won’t need directions because once you’re on Route 1 going south, you’ll smell that delicious aroma. So just follow your nose down Seaside Avenue to the beach and some of the very best barbecue you’ll ever enjoy, less than 50 feet from the waves.

“It originally started as a hobby,” owner John Annello says. “My mother was a tremendous cook, made a lot of Italian food. Growing up, I just watched. Then I started cooking at parties. In 1986 I had my first smoker built because I love smoking meats.” Annello owned a big horse farm and had a big family as well – “six kids – so I’d load them all up to go to horse shows. I had a four foot flat top grill that I put on wooden horses, so wherever we went, I cooked. I wound up cooking breakfast for everyone at all the shows and loved it.” 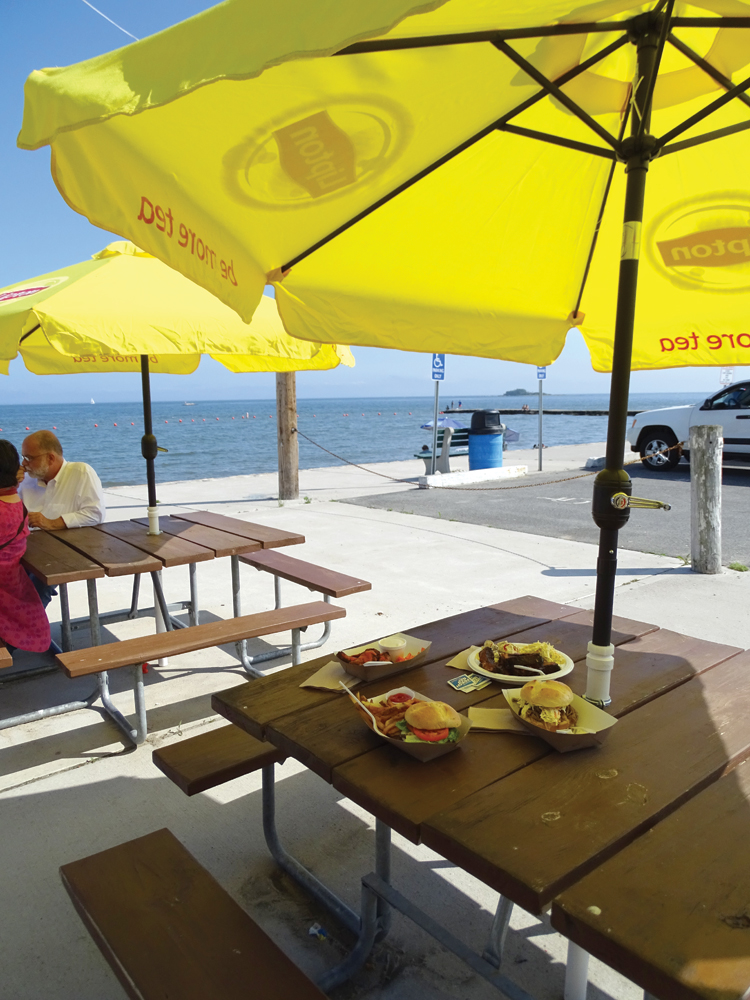 Just steps from the beach

As far as a “real job,” Annello’s had them all. “I had a transport business for a while hauling off-lease cars for the banks. I was the original jack of all trades and master of none, but cooking seemed to stay with me.” His renaissance man existence never seemed to matter much because John Annello is a happy, content, fulfilled man doing exactly what he loves best. “I’m not a chef – I’m a pitmaster – and I love people. If you don’t love people, this is the wrong business.”  But for Annello it was, and continues to be, exactly the right business. The right place to be at this point in life.

Working a punishing 6AM to 8PM schedule seven days a week from Memorial Day to October 15th each year, he relishes being king of his smoker and serving during every daypart. “The best sunrises are right here,” Annello exclaims pulling out his phone with saved images to validate the point. “So I started serving sunrise breakfast. Nothing fancy, but from 7AM to 11AM people can enjoy the sunrise, the beach, and have a little breakfast at the same time.”

But when breakfast time ends, that’s when Annello and Hog Wild really shine. “I have Myron Mixon smokers, (he, the world famous pitmaster and the winner of more barbecue competitions than anyone else in the world – some 180 grand championships). In addition to running a barbecue school in Georgia, Mixon has designed what is considered to be the best smoker in the industry. Now fabricated in nearby Waterford using cutting-edge technology, the Myron Mixon smoker is the Cadillac of the industry and something John Annello attributes to his success.

“I put a tub of water in it with apple cider vinegar and apple juice. That keeps the meat moist and forms a nice crust when you smoke it, sealing in the juices. I absolutely do not inject the meat with spices ever…why take away from the meat’s flavor?”

And oh, what meats Annello and that smoker produce! “Our most popular are the pulled pork, brisket, and baby back ribs,”  Hog Wild also has pulled chicken, grilled chicken, chicken tenders, wings in a variety of heats, burgers, fries, BBQ baked beans, potato salad, and honey corn bread. Weekends he has begun offering sizzling ribeye steaks complemented by his own touch. Even though Hog Wild’s right at the shoreline, Annello wisely lets other area restaurants handle the seafood. He just does what he does better than anybody else. “We do, however,  have a 5 oz. gourmet stuffed clam that I smoke,” he says, eyes dancing. 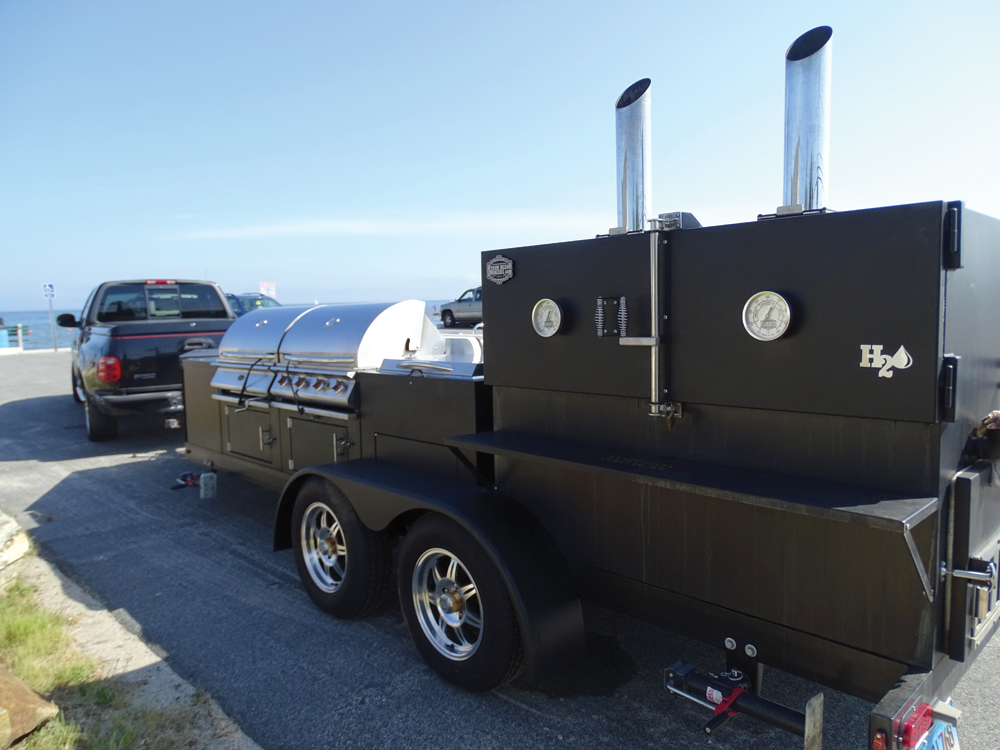 There is comfortable outside seating just steps from the nearest wave, but some diners choose to take their meals home, and that’s fine with John who caters year ‘round. “I have an a la carte menu in case people are having a house party, corporate outing, wedding, or charity event and want pans of our meats and sides. I also have a 22’ trailer fitted with a smoker, sink, grills, a stove…everything’s self-contained, and I can feed up to 300 on location anywhere. We even provide tents, cloths, utensils, dishes, beverages, music…the whole party!”

Although Hog Wild Smokin’ Cue has been on the beach in Westbrook just four years, its reputation has been carried by those waves up and down the shore. Annello now has “regulars” from New York, Massachusetts, and Rhode Island in addition to the locals who just love those delicious slow-cooked meats. “My brisket cooks for 18 hours every day; pork butts for 8-9 hours, and chickens for 31/2. Every pitmaster worth his reputation has his own rubs; and John Annello is no exception, having developed secret blends that form the cornerstone of his reputation.

His love of people remains evident with ongoing community involvement. “I feed the firemen before the parade every year,” he says; and two days a week in summer the Parks and Rec camp kids come here to eat. At the end of the season I sponsor a Sand Castle contest and give out trophies to the winners.”

Annello holds court from a stool in the tiny kitchen at Hog Wild Smokin’ Cue. His expression is relaxed, his face unlined. Despite the many hours he’s already put in, he seems effervescent and eager to keep going. “I have no regrets, no stress. Life has been good to me,” says Annello. In the end it turns out that all he really had to do was follow his heart…so that all you really have to do is follow your nose.

Go Hog Wild by taking Seaside Avenue off Rt. 1A to Westbrook Beach. Catering information and to order takeout: (860) 662-3081 www.hogwildsmokingcue.com

“Fistful of Stars” Eliza Mcnitt & The Science of storytelling

A Dirty Stick, A Cocktail Napkin, and A Few Good Friends
Scroll to top
X