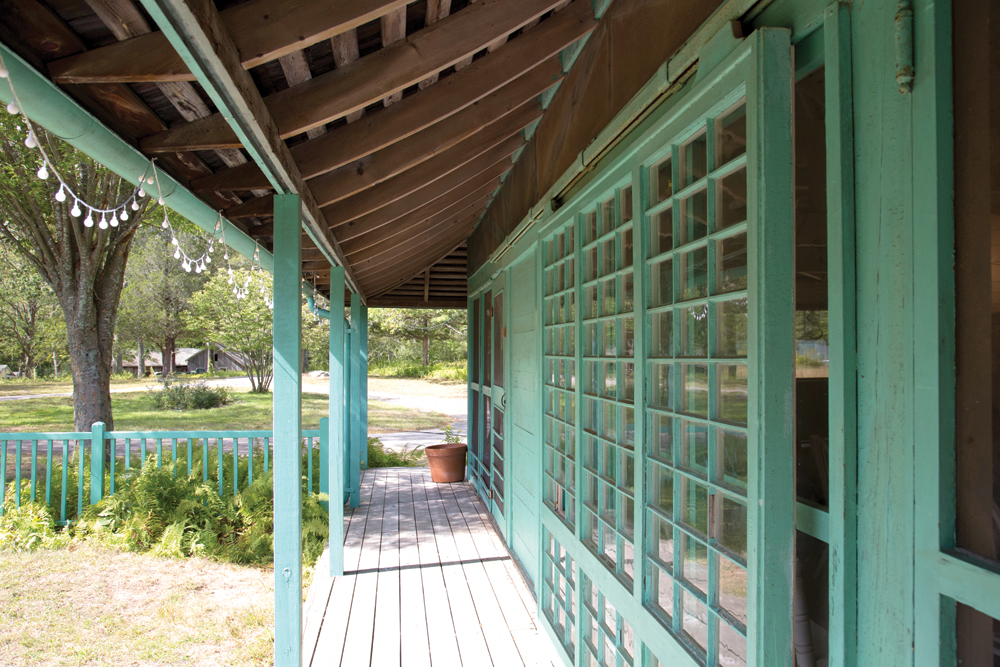 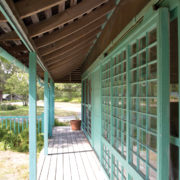 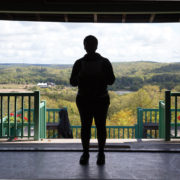 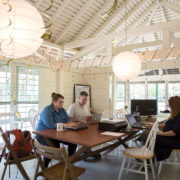 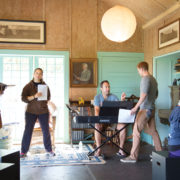 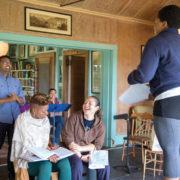 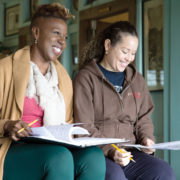 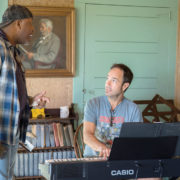 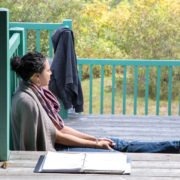 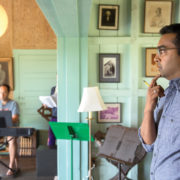 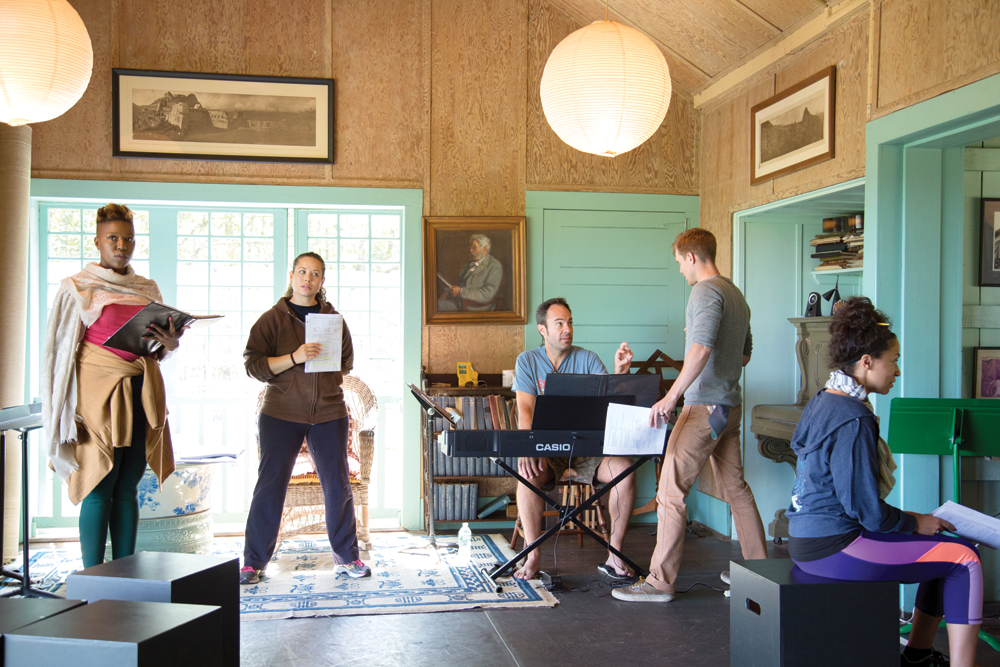 In the heart of Salem, Connecticut is a camp hidden amongst acres of trust-protected forest. It’s located down a dirt road that meanders past a small nondescript cemetery where generations of Binghams and Mitchells are interred. It ends at a clearing where an authentic Japanese teahouse stands, surrounded by commanding views of the valley below.

This camp has been in the Bingham family since 1905. It was originally a summer home when it was first built by Annie Olivia Tiffany Mitchell and her husband Alfred Mitchell, but it was also used as a gathering place for extended family, reunions, and lengthy stays…and still is.

(Annie was the daughter of Charles Lewis Tiffany from Killingly, Connecticut, who founded Tiffany and Company in New York and sister to Louis Comfort Tiffany, the preeminent stained glass artist. Her daughter, Alfreda Nonna Mitchell Bingham, married Hiram Bingham III, the 69th Governor of Connecticut, a U.S. Senator, and the explorer credited with the rediscovery of the Inca citadel, Machu Picchu. A plaque commemorating the 100th anniversary of his birth was added to the ancestral burial grounds by his seven sons in 1975).

The family compound is a typical rustic New England camp; and although it now has electricity, indoor plumbing, and running water, it still lacks heat, making it accessible only during the warmer months. It’s not fancy, but that is the very charm of it. It’s as understated as the vast achievements of the Binghams themselves that include generations of esteemed politicians, innovators, philanthropists, scholars, historians, magazine editors, lawyers, humanitarians, and thespians such as Devanand Janki.  Janki is also an award winning director and choreographer, the great-grandson of Hiram Bingham III, and the founder of the Bingham Camp Theater Retreat (BCTR), now entering its third season.

The BCTR is a non-profit organization dedicated to “developing new work for the stage, while promoting and celebrating diversity. Emphasizing non-traditional casting, multi-ethnic participants, and bold theatricality, BCTR offers unique development opportunities for new plays and musicals that encourage dialogue among artists from a variety of cultures.”

“As a person of color, I got tired of waiting for other people to hand me opportunities and fighting with them about why diversity is important, and why stories about people of color are so important; so I decided to do it myself. It goes hand in hand with what’s going on in the world and the need for inclusion,” says Janki. “At BCTR we are doing our part to represent the vast differences in this country. One of the most inspiring ways to do that is through art. It’s a non-threatening form of communication.” 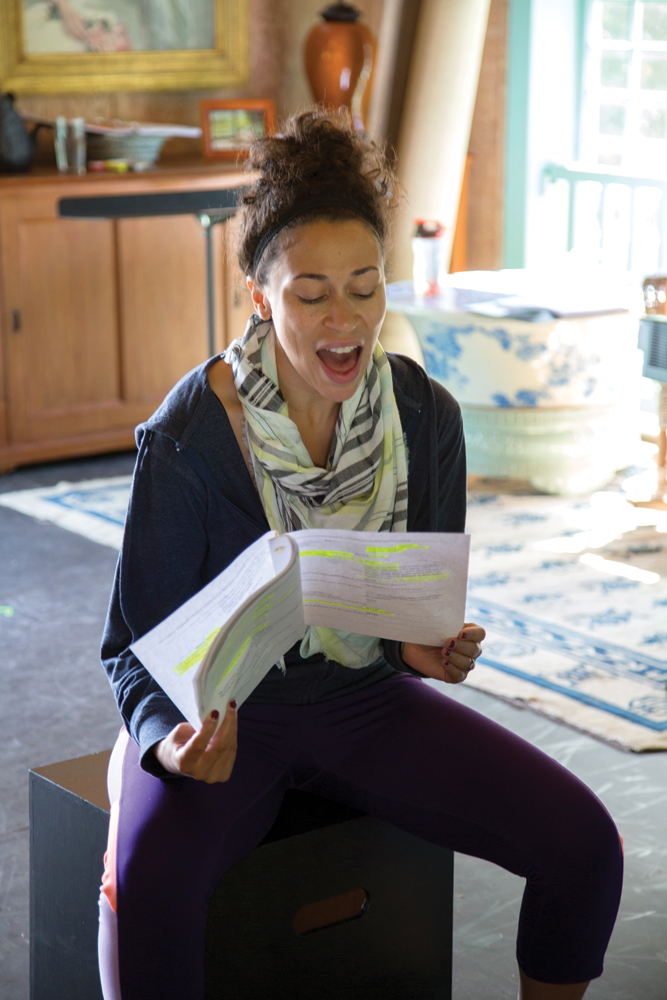 Each September, Broadway artists flock to the same Connecticut woods where Janki spent his childhood summers, to produce a new play that will be performed for the public. One script is selected from literally hundreds that are submitted by writers across the country, although the hope is to develop more as funding permits.

“Salem is my second home. The camp was a place where my aunts and uncles who were writers, artists, and musicians had concerts and wrote operas. It was very inspiring. As an adult, I brought my own friends there and later my professional colleagues for vacation. Inevitably, when you get creative people together, things happen. So starting BCTR was a very organic progression. Hopefully, it will become a growing creative center for Connecticut,” says Janki, who also resides in New York.

For two weeks the performers live together, eat together, and create together. They immerse themselves in the project at hand developing, rewriting, and rehearsing a scene. Members of the local community come out to the camp and volunteer their time cooking, shopping, and driving; doing whatever is needed to help.

“The community has been so enthusiastic, loving, and supportive. We have developed a lot of relationships with local businesses. Our good friends at Sunset Hill Vineyard provide the wine, Ashlawn Farms brings coffee, and our vegetables come from Provider Farm. Every night someone from the community visits and cooks us full-on Thanksgiving dinners,” says Janki.

After a fortnight, the work is presented to the community and other professionals. The main section of the teahouse that serves as a living room and dining area is transformed into an open-air stage. Because it is a traditional teahouse, when the doors slide open, there is no separation between the inside and the outside, just as there is no separation between the actors and the audience.

“It’s a very intimate experience. That’s part of the magic. You are really right next to the actors and having a very visceral experience,” says Janki. “The audience gets to see a brand new musical in its first form. Costumes are minimal, and so are the technical aspects. Our hope is to nurture this work so theaters in Connecticut, if not Broadway, will go on to produce it.”

Janki entered into the performing arts because, as he likes to say, he had no other choice. He immediately fell in love with dance and theater after his parents took him to see the Bolshoi ballet in Russia at age four. As a child, he was a boy soprano with the Edmonton Opera Company in Canada where his family lived at the time. As a teenager he trained as a professional ballet dancer, performing at the Citadel Theater, with the Alberta Ballet Company, the National Ballet of Canada, and at the Banff Festival of the Arts. At age 18 he enrolled in the American Musical and Dramatic Academy in Manhattan, and after graduation spent ten years working on Broadway as a performer in Miss Saigon, Cats, The King and I, A Chorus Line, West Side Story, and more. As a director and choreographer he has worked with talent such as Bebe Neuwirth, Alan Cumming, Lauren Bacall, John Stamos, Peter Gallagher, Jennifer Hudson, Whoopie Goldberg, Lynn Redgrave, and others. But even with all this success, Janki’s real passion is creating new work.

“There is nothing more exciting than introducing an audience to something they have never seen before. There needs to be constant support for new writers and up and coming artists,” says Janki.

In addition to the September performance, BCTR hosts two concerts annually featuring top-notch Broadway artists; these are festive galas and the organization’s fundraisers. Other public events are a Fireside Reading of a new play and a Cabaret Evening that includes local talent. BCTR also provides internships for students, giving them an opportunity to work alongside professionals in a theater company  and has an educational program for teens. They are always looking for ways to be of service to the arts and artists in Connecticut and welcome people to join their team.

“What is thrilling for me is how much Connecticut has embraced us. I talked with a lot of people in the community when I was deciding to start this, wondering if there would be support. People said unanimously they were starved for culture. It was encouraging to hear. We are bringing all these talented people of color from the city to Connecticut, which is something they don’t often see. I think that is the magic of it,” Janki says.

Mentors, Lyrical Fireworks, & the Alamo -The Ascendancy of Opera Star,...