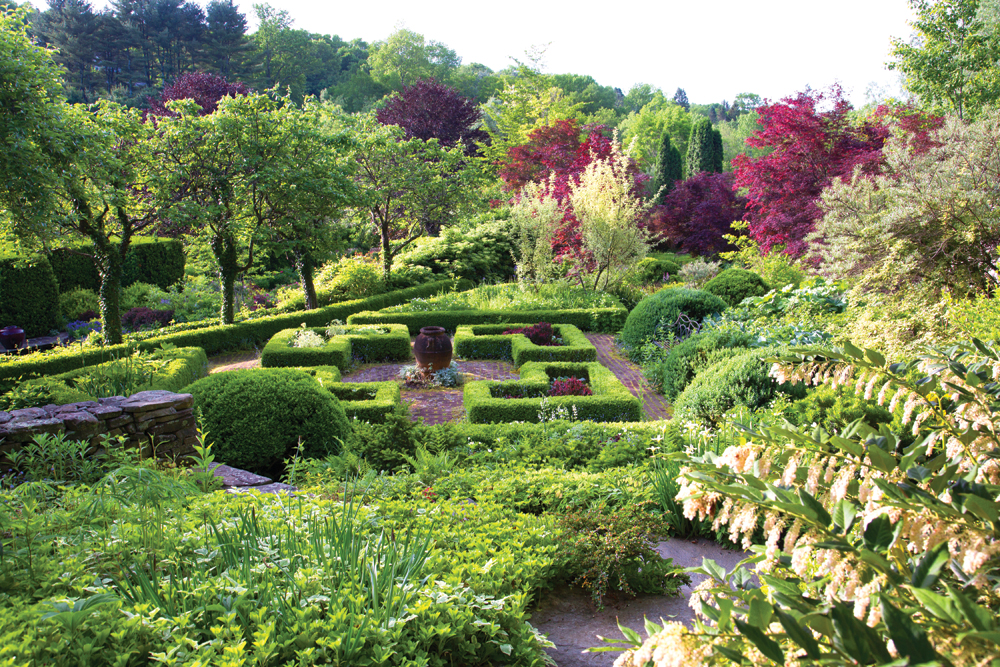 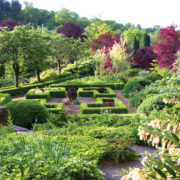 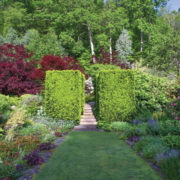 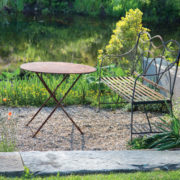 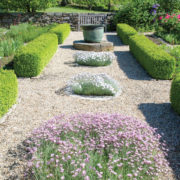 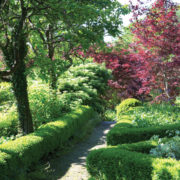 Profile and photos by Caryn B. Davis

The Persian word for “paradise” means exceptional gardens, and a visit to the Hollister House Garden in Washington, Connecticut is nothing short of that. Garnering inspiration from traditional English gardens he visited such as Snowshill Manor, Great Dixter, and Hidcote, George Schoellkopf has transformed 25 acres into a lush array of plantings, each unique in its design, color palette, and sensory experience. 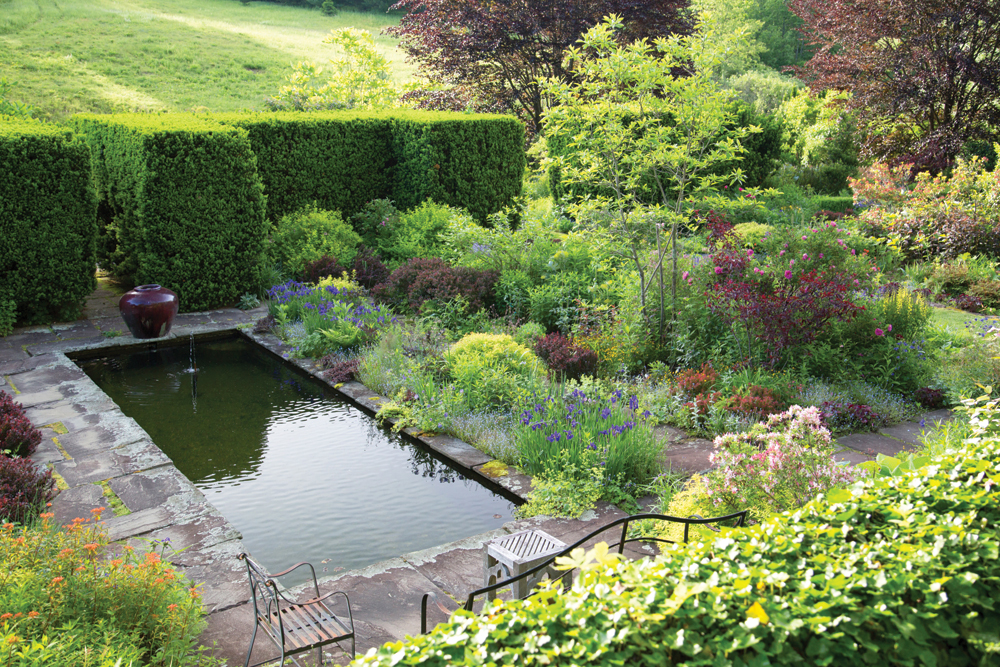 “I was visiting a friend who had just made an English style garden, and he gave me a book to read about Sissinghurst. I fell in love with English gardens and wanted to come home and make one,” Schoellkopf says.

Schoellkopf acquired Hollister House in 1979 when seeking a respite from New York City. At the time, he was a noted antiques dealer with a shop and gallery on Madison Avenue specializing in 18th and 19th century American country furniture and folk art. He was already familiar with Litchfield County, having gone on many buying trips to the area, so he began his search for real estate there and eventually found Hollister House. It was originally built as a saltbox by Gideon Hollister II just before the American Revolution; and although it has been added onto over the years as have many New England homes from this period, it still retains its colonial appeal.

“It is a lovely old house in a beautiful setting. I thought it was just charming so I bought it,” says Schoellkopf who meticulously planned the gardens so they would be in concert with the house and surrounding landscape.

Schoellkopf never had any intention of designing a world-class garden that would eventually become a non-profit organization and educational institution open to the public. In the early days, it was just a place to spend weekends away from the city  laying stone or planting flowers; but some 40-odd years later, he finds himself still at it and has become somewhat of an expert, sharing his knowledge through articles he has penned for many major magazines on the subject. 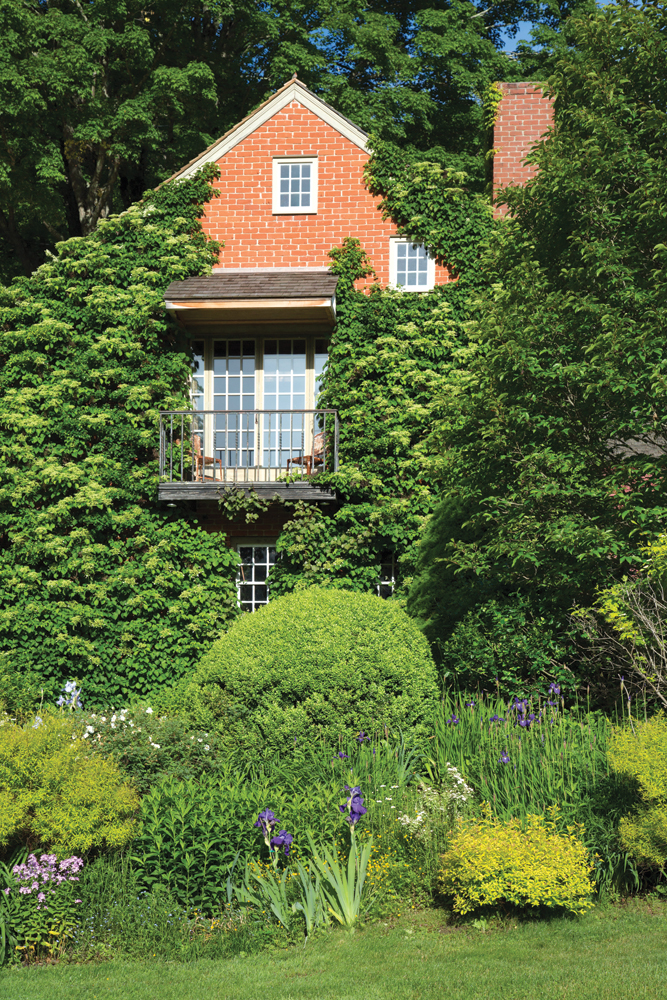 “Initially when I came back from England, reality set in, and I realized I didn’t have a grand manor house or castle. I had an American house with an American history. My great fear was the garden I envisioned would be too complicated or perhaps even too pretentious for the old farmhouse,” says Schoellkopf.

Schoellkopf learned by doing and from talking to people; and as he likes to say, killed a great many plants in the process while figuring out which ones would prosper. He likes the garden to look a little overgrown with the flora close together, as if it were the plant’s idea to grow there and not his; even if in actuality, he labored to get a patch of something established.

“My idea is that the structure in a garden provides a framework so the plants can run freely. The architectural forms such as the walls, hedges, and paths are formal elements of garden design; and yet the garden itself, in the way it is planted, is not formal at all. So I think it’s sort of a paradox,” he says.

Over the past four decades, first working with Ron Johnson and later with artist and photographer Gerald Incandela, among others, Schoellkopf has created a variety of terraces, vistas, and walkways – some that meander past a reflecting pool, brook, or pond – and several “outdoor rooms,” each exquisitely defined by the selected plantings, use of color, and boundaries. While he is not trying to recreate an English garden per se, it’s the style that attracts him.

“The division between the spaces and how you move from one section to the other, is part of what makes the gardens so exciting. It’s almost as dramatic as when you stop to look around,” says Schoellkopf. “There’s one part of this garden where you go through an archway; and people always say in this same little spot, ‘Oh, that’s the secret garden.’ It feels that way because it surprises.”

When it comes to gardening, Schoellkopf’s philosophy is one of abundance and generosity. Color is extremely important; although as he says, it’s more about what he doesn’t like than what he does, that can dictate his choices. 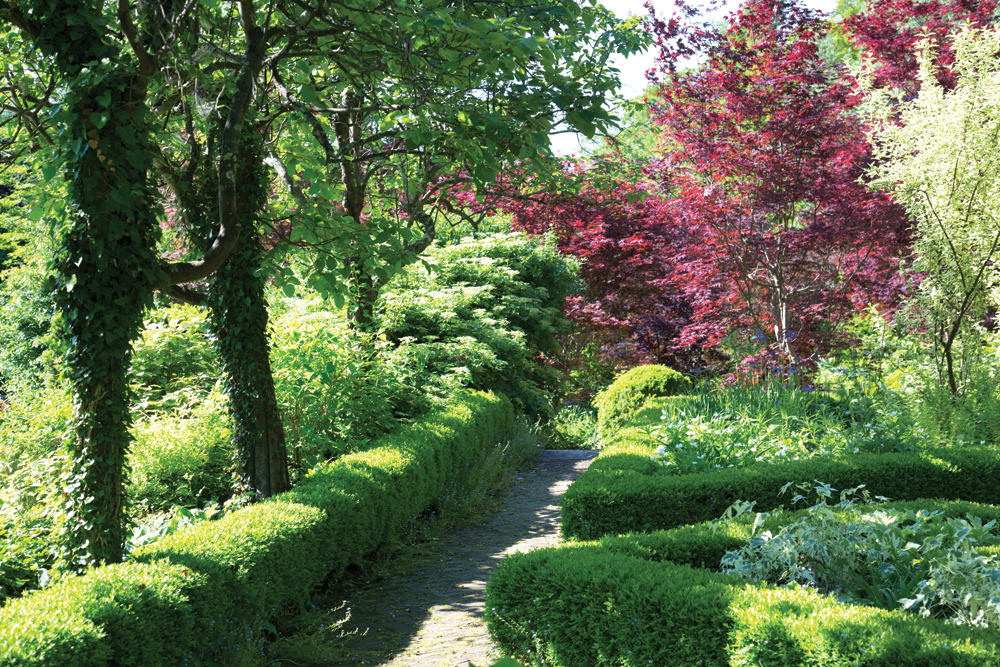 “There are certain colors that grate on my sensibility like fingers on a blackboard. For instance, magenta and taxi cab yellow. Orange is something I only recently turned onto. It’s a tricky color to combine. It doesn’t look good with red or yellow for me,” Schoellkopf says. “These choices are very personal. Color is like religion or politics. You are never going to convince anybody that what you like is what he or she should like.”

In 2005, Schoellkopf and Hollister House, Inc. entered into an irrevocable agreement with the Garden Conservancy, a non-profit organization located in Cold Spring, New York, whose mission is “to help save gardens by helping private gardens become public gardens.” Either during his lifetime or through his will, the entire property  including house, garden, and 25 acres, will eventually be donated to the Conservancy. A very impressive and talented Advisory Board and Board of Directors that reads more like a who’s who in the world of gardening and includes renowned garden writers, lecturers, designers, magazine editors, preservationists, horticulture experts, architects, landscape architectures, interior designers and an Emmy Award-winning television producer, were established to aid with this endeavor.

The public can visit the gardens on Fridays and Saturdays from May to September or to attend one of the many events Hollister House Garden hosts such as Drawing in the Garden with botanical art instructor, Carol Ann Morley; a concert presented by The New Baroque Soloists under the creative direction of Douglas Myers; Twilight in the Garden, where guests can enjoy a sunset accompanied by wine and nibbles; a series of garden photography workshops with Rich Pomerantz; a lecture with award- winning author, Lee Buttala on the art and practice of saving seeds; bluegrass, Celtic and swing music with Too Blue; a flower arranging workshop led by florist and horticulture professional, Debbie Brown; and a symposium entitled “The Exuberant Garden,” moderated by Todd Forrest from the New York Botanical Garden.

This exciting all day symposium features the following distinguished speakers:

Dutch landscape designer, Jacqueline van der Kloet, who will talk about making magical mixes in the garden; Tom Coward on leading the restoration of William Robinson’s legendary gardens at Gravetye Manor; Andrew Bunting, an expert on woody plants and the author on “Plant Lover’s Guide to Magnolias;” and Jane Garmey, a celebrated author and passionate gardener who will talk about “A Sense of Place: Challenges, Approaches, and Solutions to Creating Gardens.”

“I did not envision that Hollister House Garden would become an educational institution. I thought we would just preserve the garden. But I am having a good time with it; and I am always overwhelmed by how many people come through and tell me it’s the most beautiful garden they have ever seen,” says Schoellkopf. 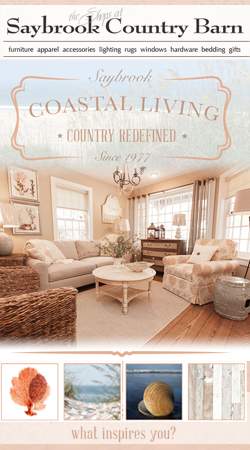 Chariho Furniture…Same as It Never Was
Scroll to top
X