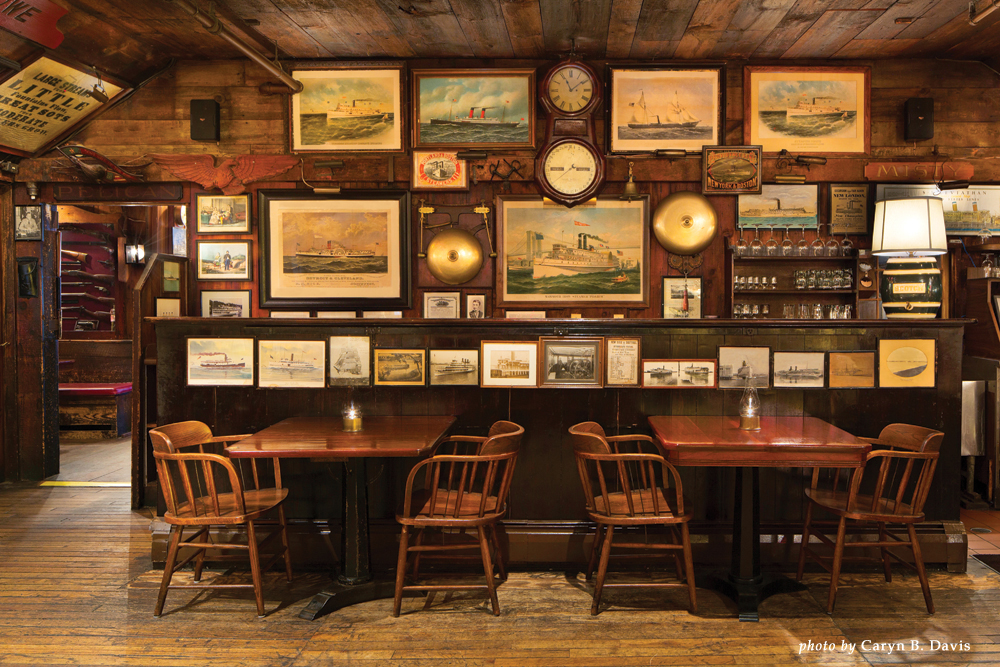 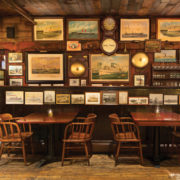 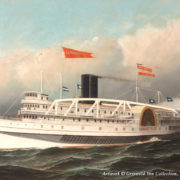 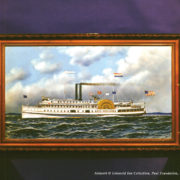 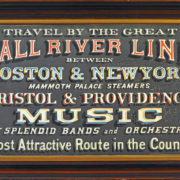 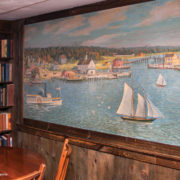 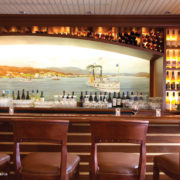 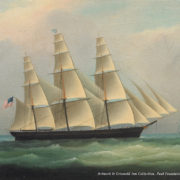 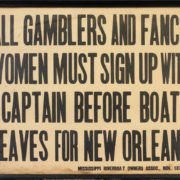 Steamboat Storytellers at The Griswold Inn 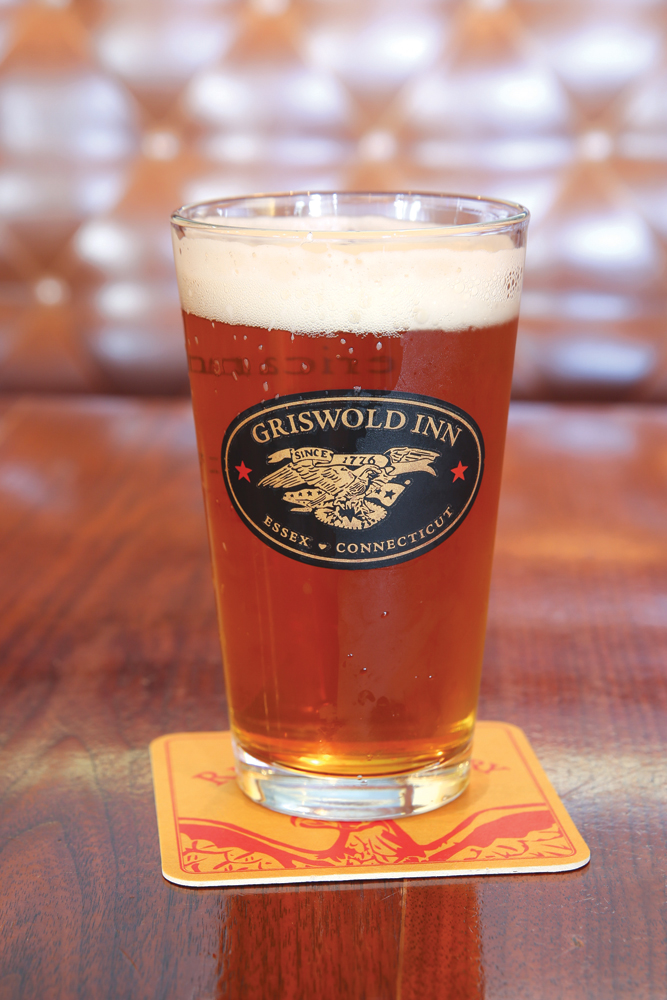 The Griswold Inn in Essex, Connecticut, is the best New England has to offer. It exceeds our expectations of what a quintessential New England inn should look like; but more importantly, feel like. On any wintry day, visitors to the Tap Room can expect a roaring fire, congenial conversation, and a lively atmosphere. You immediately feel a sense of belonging, even if you have never been to The Gris (as it is affectionately called by locals) before. It’s somehow familiar. Maybe it’s in the DNA of the building itself. Or maybe it’s all the people that have passed through these same doors during the inn’s 242 year history for the same reason – to congregate and experience community.

Geoffrey Paul and his brothers Greg and Doug (the current proprietors, along with Doug’s wife, Joan) have fond memories of The Gris.

“My parents brought me to the Tap Room when I was five. I am sure it’s the first bar I ever went to. This is what you did back then in Essex, particularly on a snowy day. Locals would walk down, gather in front the fireplace, and listen to music,” says Geoffrey Paul whose family purchased the inn in 1995, becoming the sixth family to own it.

“The more I traveled outside of Essex, the more I appreciated what a special place it is and appreciated the traditions carried on here that have been lost to other places. It became important to us to preserve those traditions and keep them alive and maintain the authenticity of The Gris because it still performs the same function it always has. It’s still the heart and soul of the community,” continues Paul.

The Gris developed from necessity when Uriah Hayden was commissioned by the government to build Connecticut’s first warship, the Oliver Cromwell. Hayden owned a shipyard in Essex and an inn. The inn provided lodging for the shipwrights  and the politicians who came to inspect their work. After the Cromwell was launched in 1776, the inn continued to expand. Ethan Bushnell took it over and added a tavern in 1806. The British used it as their headquarters in 1814 when they raided Essex, burning ships in the harbor. When steamboat and ferry service was established on the Connecticut River in 1824, Essex became a major port of call and the inn, a respite for travelers. Today The Gris has the distinction of being one of the oldest continuously operating inns in the country and is home to residents and tourists alike.

Throughout the centuries, the inn has meant many things to many people. This is evidenced by an impressive collection of steamboat art and ephemera (approximately 1000 pieces) covering the walls.

“Many objects were donated by our patrons who wanted to be remembered. Maybe one was a captain on a steamboat on the Connecticut River in the late 1800s, and this was his favorite bar; so he gave The Gris a print of his vessel. Many pieces came to us like that because we pre-date most museums and historical societies,” says Paul. “Much of what is here has been here for the life of the inn and hangs on the same wall as when it was first acquired.”

The Gris has the largest collection of material relating to the history of steam boating on the Connecticut River and Long Island Sound that exists anywhere. This includes those in private collections and museums. In fact, they often loan artwork to museums. But while their collection is well rounded, they have added key pieces to further enhance the narrative.

“This collection was accumulated before the art critics and museum people decided who was important in the art world and who wasn’t. We have some important masterpieces, but there is also just stuff, that to someone else might not represent much value, but to me tells a story. You can see a collection in a museum with some spectacular items, but the collection can lack a soul because it’s almost too perfect and too sterile,” says Paul. “This collection happened organically. It was created because somebody had a connection to the subject manner.”

One of the masterpieces Paul is referring to is an 1889 oil painting by Antonio Nicolo Gasparo Jacobsen, a renowned 19th century marine artist. In his lifetime, Jacobsen produced 6000 portraits of steamboats. The originals were sold to the ships’ owners or captains, but prints were made for passengers who could not afford them. Paul is particularly enamored with this piece because in addition to it being one of the artist’s finest, it tells a great story. And Paul is drawn to stories, which is just one reason he collects art.

“When I see a print or painting of a steamboat in flames, for example, I want to know what that event was about. Why was it commemorated? It must have been important to someone at the time. That’s what I think this art keeps alive – these human stories,” says Paul. “In Jacobsen’s painting we see the steamer “Connecticut” with its white gleaming hull emerging from dark storm clouds, basically symbolizing the Industrial Revolution and the power of man to overcome nature.” 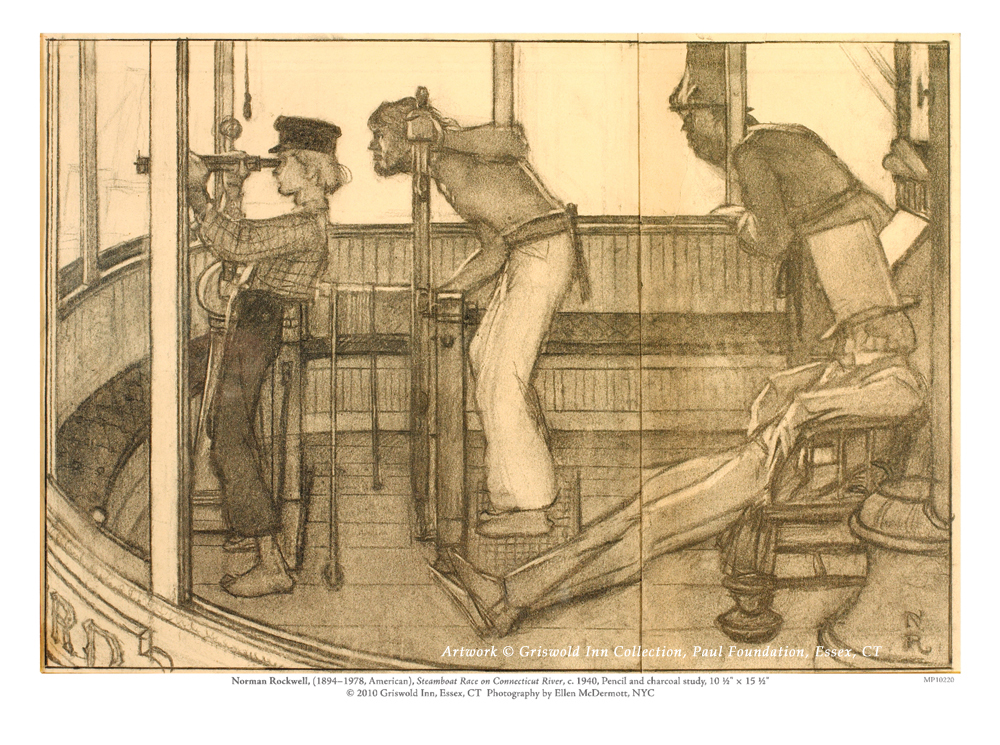 Another favorite is a drawing, circa 1930, by Norman Rockwell called “Steamboat Race on the Connecticut.”

“It’s the only maritime picture he ever did that took place on the water. It was an illustration for a Saturday Evening Post story about a fictitious steamboat recklessly racing another boat up the Connecticut River. It shows the drama of the steamboat inspector looking to arrest the captain,” says Paul. “The original oil painting came up for auction some years later. It’s now in the collection of Steven Spielberg and George Lucas, who themselves are considered pretty great storytellers.”

Other items that speak to local history are three silk banners carried by women from the “Temperance Movement” who marched down Main Street Essex in the 1840s. (Many found their way into The Gris to gather their husbands).

“These courageous women banned together to promote temperance, which means the responsible consumption of alcohol. This was the rallying cry for women to organize for the first time in our nation’s history. These very same societies morphed into women’s suffragette societies and brought women the vote. So the symbolism of these early banners is much more than just protesting excessive drinking,” Paul says.

Also on the wall is a gun collection with pieces from Connecticut manufacturers Samuel Colt and Simeon North, among others.

“One is a flintlock hunting rifle from the early to mid 1700s given to us by a local family about 150 years ago because they wanted a place to keep their history alive. A poem was inserted into the barrel dated July 7, 1776 that read: My dear son Jared./I give you this my gun./Do not handle it in fun./But with it join ye ranks of Washington/ and make ye British run./ And when our war for independence is won/ we shall sit down and have a glass of good old rum./ Your father.

“Today we send our sons and daughters to war, and we give them what we hope is the very best weaponry and technology to keep them safe. But at that time, the only thing this father had to give his 14 year old son was this family’s hunting rifle; and with it, he said, ‘go and fight the greatest super power on earth,’” reflects Paul.

It is stories such as these that chronicle the history of Essex and Connecticut and the Griswold Inn’s place within that communal past and present. The Pauls, as stewards of this priceless collection and antique inn, continue to restore both responsibly and faithfully.

The Gris will host complimentary tours of their art collection led by Geoffrey Paul on February 11, March 4, and April 8. For more information log onto www.griswoldinn.com/art-tours/