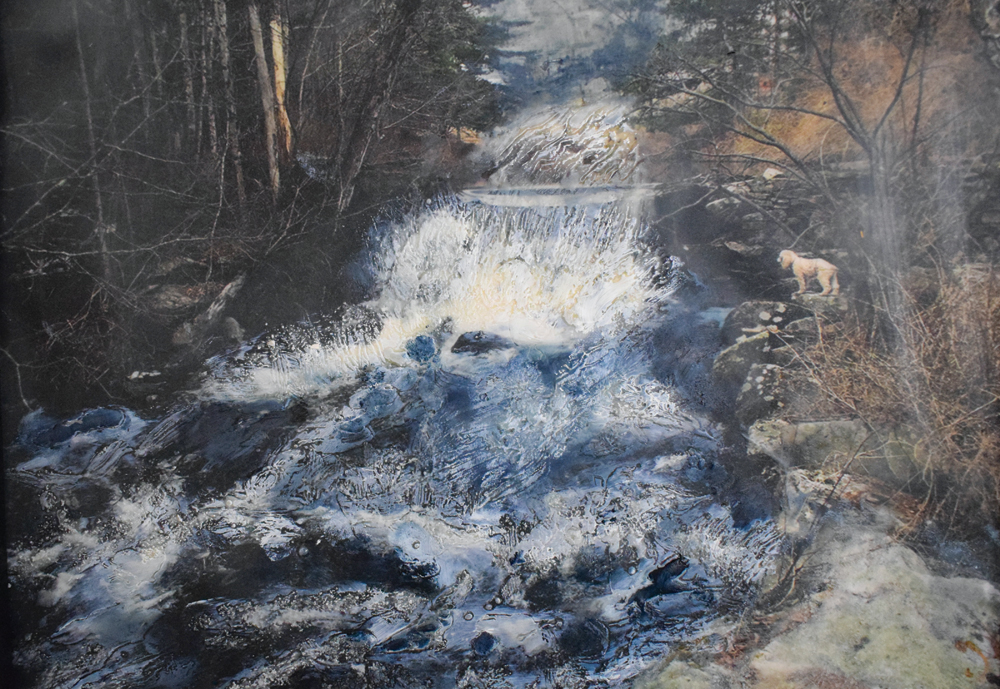 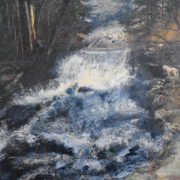 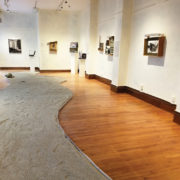 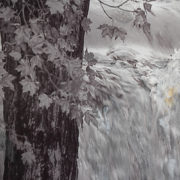 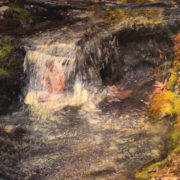 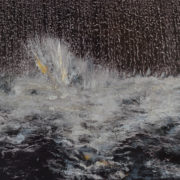 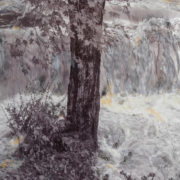 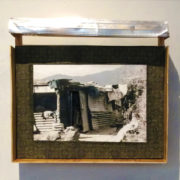 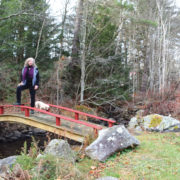 Is the artist the work, is the work the artist, or is each element autonomous under its own power? 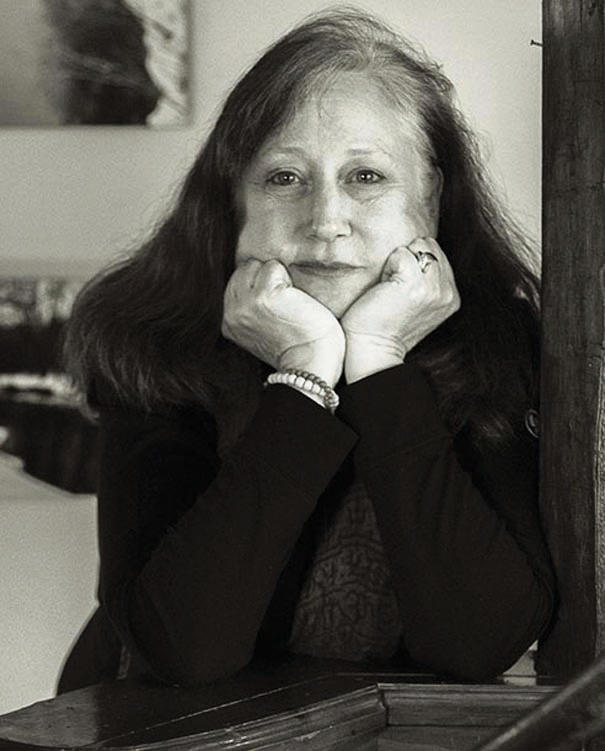 Previewing the environmentally focused Far Eastern oeuvre of artist, writer, critic, and educator Gail Gelburd an overriding riddle – in this case, koan – reveals itself with the impact of your first glimpse. You want to sit down with her and delve deeper. A studio visit is quickly arranged at her enclave in the Berkshires. First – a long look at the work.

The Ph.D. and Professor in the Art Department at Eastern Connecticut State University, is currently exhibiting both her installation series, Encased Memories and Public Art Piece, Unbound Presence at MS17 Art Project in New London – the highly innovative and progressively dynamic contemporary gallery focusing on social and environmental commentary and a myriad of global concerns.

There is a prelude to the exhibition gallery housed in the adjacent public space. The artist’s five semi-transparent 20 foot scrolls curtain the soaring atrium at MS17, boldly illustrating the dynamism and unpredictability of water with the raw power and varying ferocity of cascading waterfalls. This is an interactive experience: viewers stand beneath the panels­ – each an archival digital print on fabric embellished with encaustic (wax) medium; and in this place, feel the movement of water against nature. Standing amidst the boldness of the work, the effect is humbling…close your eyes and sense the chilling mist on your skin. Nature becomes bigger than you are, and there is a profound sense where Gelburd is going with this conversation. 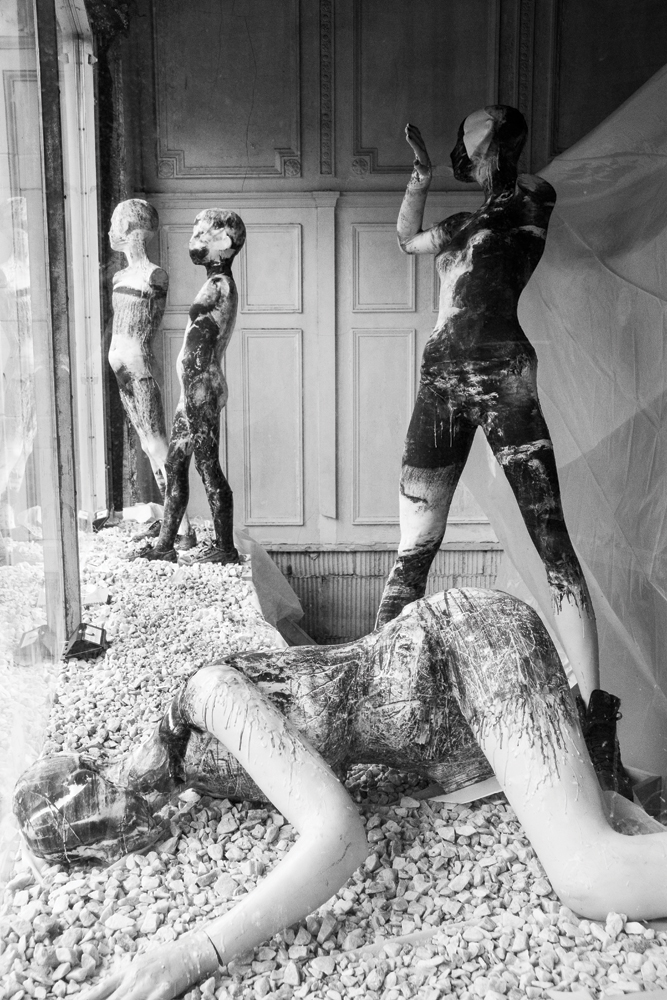 Beyond the waterfalls, Encased Memories speaks to Gelburd’s myriad travels to the Far East and her passion for Eastern philosophies, culture, and aesthetics. These are the people who have spoken to her and provide unlimited and haunting inspiration for visual language. Having spent a great deal of time in Japan – especially in the area of the Tsunami of 2012 ­– there was no other option but to revisit this place. She constantly photographs water and nature, and the Tohoku Tsunami mirrors her powerful convergence of nature and elements. The work is self explanatory in a universal language of loss, change, and rebirth. Her Tohoku pieces speak of individuals and the falsehood of permanence in daily life when nature abruptly reclaims itself. These photographic vignettes appear in suspended animation with the encaustic layer freeze framing the events. Equally eloquent are the pieces depicting the aftermath of the Gorkha Earthquake in Nepal. She has been there as well. Having moved within the social landscape of these people and their daily routines back dropped by the Himalayas, Gelburd lends equal attention to this tragedy.

The cohesive element linking these artfully profound depictions inside the gallery is the simplicity of the artist’s replicated Zen garden at the threshold of the gallery. It appears like a quotidian thing at first – something you encounter, and move through. This thing is larger than its deceptive openness. The garden challenges the viewer to tramp through the perfection and defy and disorder the raked order of the grayed gravelly garden to get to the exhibition. Over your shoulder you catch the randomized footprints – a mash-up of the controlled beauty. Gelburd’s work is a conversation about the impermanence of the heavy-handed order and control we try our damnedest to impose on nature. Despite our best efforts, obsessively raking the metaphorical garden back to our sense of right, everything continues to change; the humbling disorder always seems to prevail. This big blue ball is a mutable place, and Gelburd’s work is a parable about our temporary position in this universe. 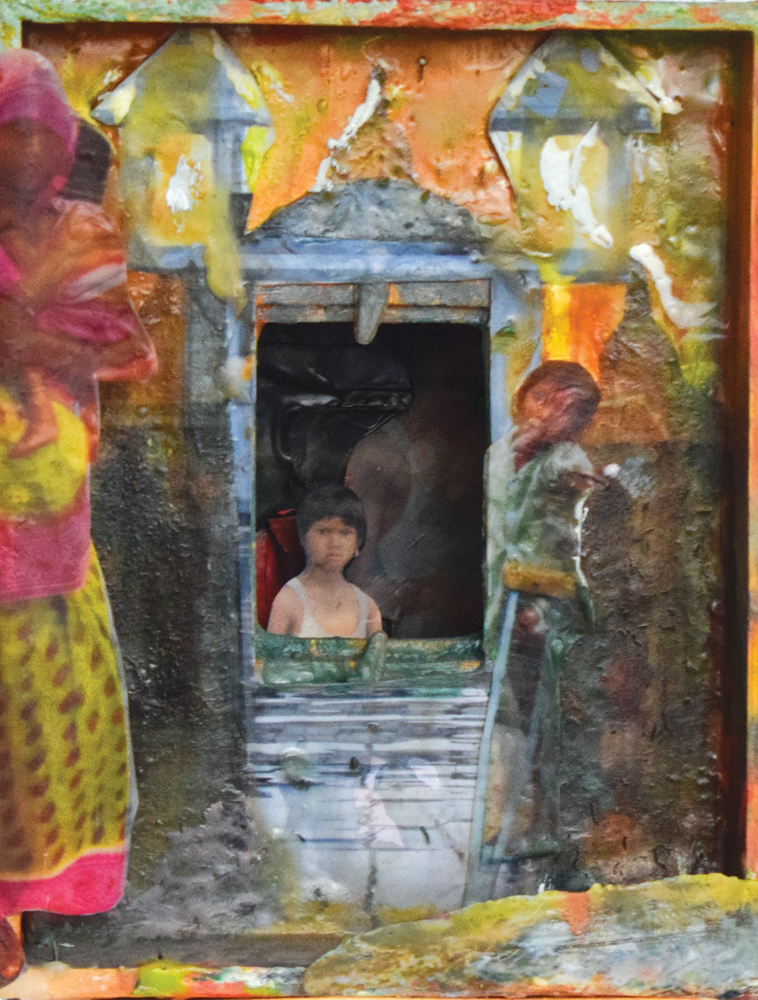 It’s all a highly impressive and impactful takeaway before the studio visit: the artist’s extensive travel, her universality in the flow of nature, and the vast stores of knowledge and dexterity necessary to communicate a lifelong career into visual essays surrounding the tragedies of the temporal.  It’s a restful hour-long unwinding drive to Gail Gelburd’s home in the Berkshires. Her old millhouse that once manufactured hay rakes – versus Zen rakes – comes up quickly. The initial view agrees with the first impression of her exhibitions and instantly validates all the conjectures about the artist and the work. A Balinese gate anchors the property, a waterfall moves freely despite the late fall weather, which will transmute the water into frozen suspended animation. Tibetan prayer flags humbly flutter in the breeze, and the river embraces the property. Like the art, everything is moving in nature and poses further questioning.

There is tea and warmth surrounded by layer upon layer of visual essays. There is evidence on the walls of her color period – the saffron Color my World­; the early shrouded experiments with encaustics. and the black and white India photographs upholstering the bedroom which mark her time in Goa and beyond. Above the helix of a spiral staircase the rough beamed gallery soars and is warmed by additional work and hospitality. The artist is animatedly approachable, and the air crackles with instantaneous connection and conversation. Gelburd’s dog, Rembrandt serpentines around the place, and there is an infusion of humanity into the home. We talk about her extensive body of writings and over twenty notable curated exhibitions in eight countries, including an extended time with John Cage – arguably one of the most profound influences to contemporary art. Gelburd and Cage connected; and during her time as museum director at Hofstra University, she had a singular opportunity to work with this luminary as a friend and colleague over the course of 5 years. There is also her work with Romare Bearden and her curation of his distinguished traveling show, with the companion volume she authored on this iconic African American artist. She also reflects on an interview with sculptor Henry Moore conducted in the middle of a field; his massive round-edged organic work juxtaposed with a random herd of frolicking sheep. 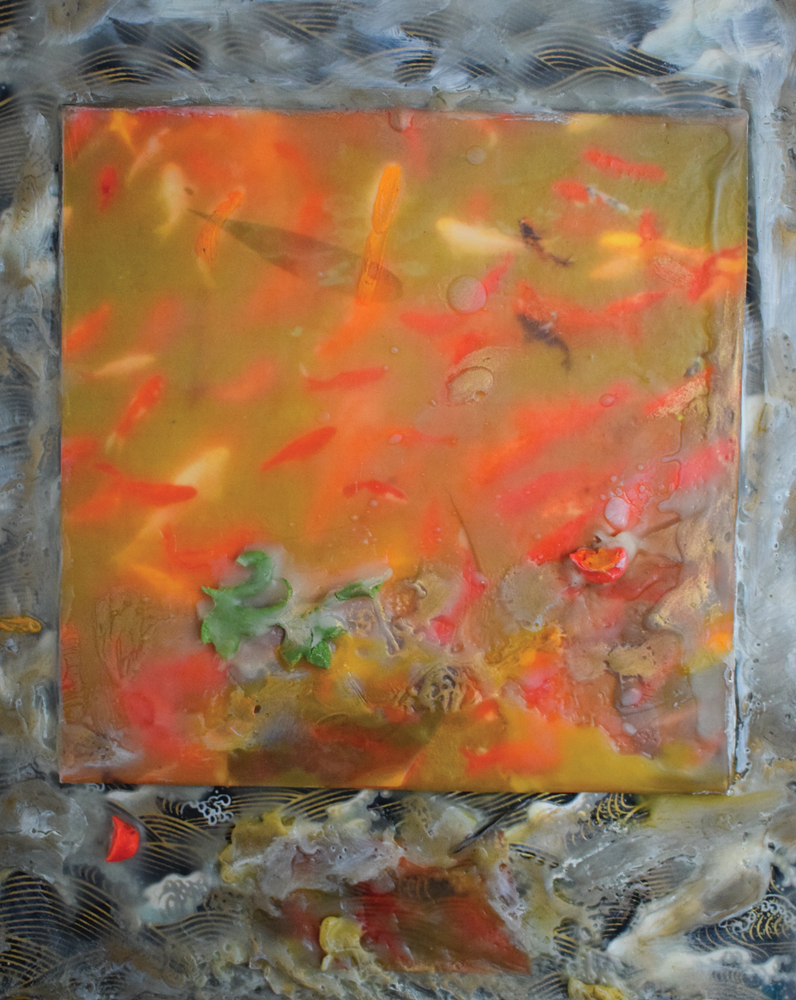 It’s an eclectic and storied life so far, with the balance attributed to a strong Buddhist foundation. Her Om Shanti exhibition was presented in Goa earlier in the year. Goa has gained a sense of safety and familiarity to Gelburd. She received a fellowship to study Jain art in India, has spent many vacations in meditation and solitude behind the walled confines of Jain monasteries, and those of a variety of other sects. She also holds a 2nd degree black belt in karate and looks at the movements as just another form of creative and thoughtful expression. Beyond the Eastern emphasis, the artist has also spent a great deal of time in Cuba and was the recipient of a distinguished Rockefeller Foundation Grant for an immersive study of Cuban art. Her resultant work and writings from this period include: “Beyond the Hype: Cuban Art,” and a major exhibition, Ajiaco: Stirrings of the Cuban Soul, a major exhibition that she curated with more than 50 works of art by 23 artists which began at the Lyman Allyn Art Museum in New London, Connecticut and traveled to Hilliard Museum in Louisiana and the Newark Museum in New Jersey. There was also a working relationship with the Whitney in New York.

The shadows are dark, and it’s time to wind down the conversation. So, is the artist the work, is the work the artist, or is each element autonomous under its own power?  In this artist’s case: all of the above, and none of the above. It depends on the season, nature’s force, and the time and space. Gelbard reflects in her artist’s statement about man and nature. “When the human form realizes that it has a symbiotic relationship with the river, the sea, the trees, and the mountain, we can begin to accept the precious majesty of our environment and become one with it.”

She presents us with questions, answers, and an essential hope.

Contact Gail Gelburd at gailgelburd.com and learn more about the MS17 Art Project exhibition and events at https://ms17artproject.com/

Steamboat Storytellers at The Griswold Inn
Scroll to top
X