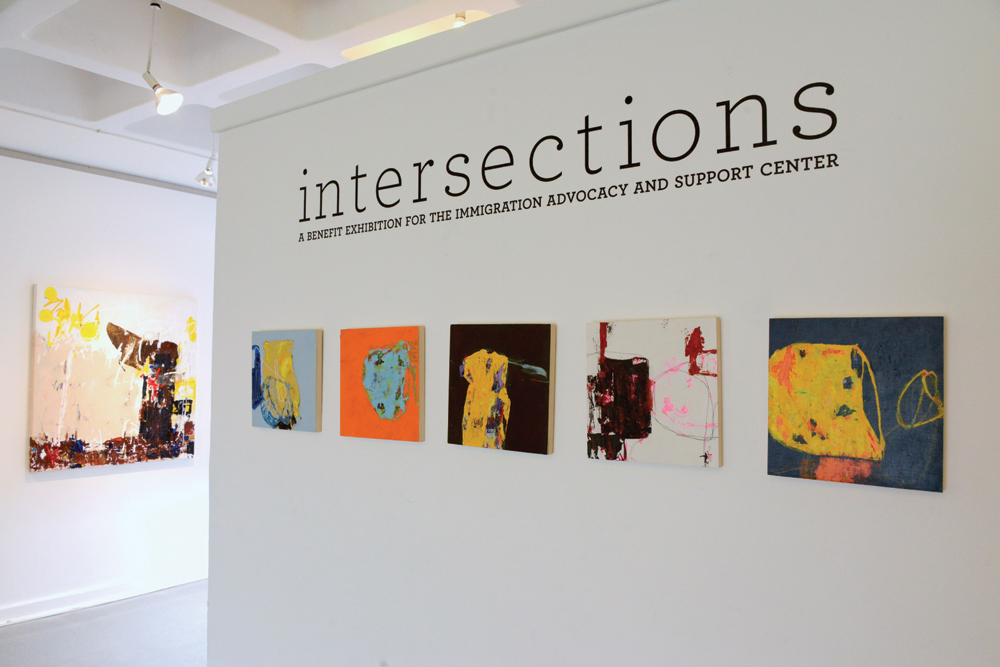 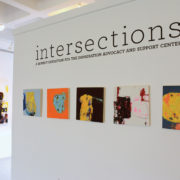 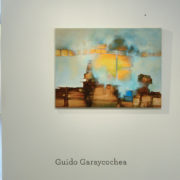 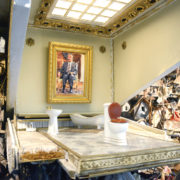 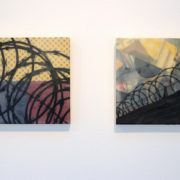 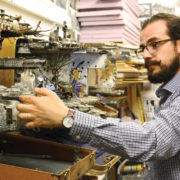 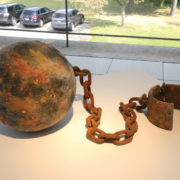 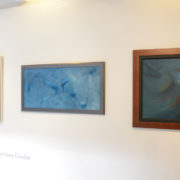 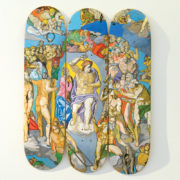 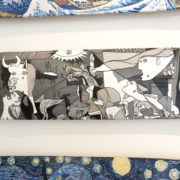 Profile by Nancy LaMar-Rodgers / Photography by A. Vincent Scarano

We are a land of immigrants.  This is the sentiment that has been at the heart of a political maelstrom since the inauguration.  For the artists who are contributors to Intersections, A Benefit for IASC, this idea is central to what they hope the public will take away from this show.

For Mohamed Hafez, an architect who designs skyscrapers all over the world, the refugee experience is now part of his family heritage.  His contribution to the immigrant art show is important because for Mohamed the current crisis cuts deep.  It is his family members, it is his home, and it is his culture that is currently being eradicated. 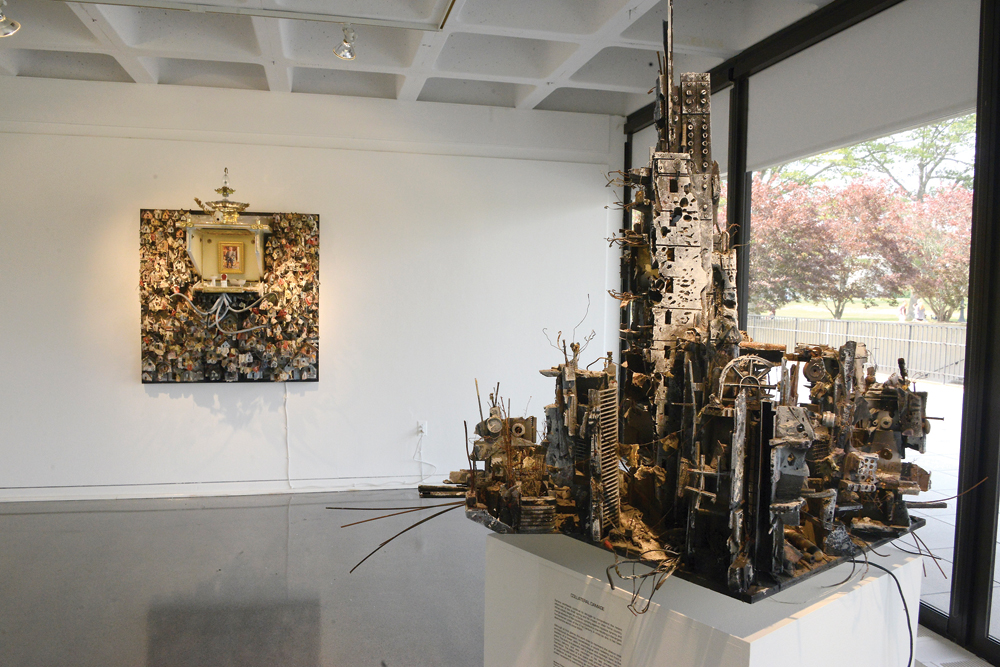 Hafez meets us in his studio space in New Haven.  The walls are covered with Time Magazine’s coverage of the Syrian refugee crisis.  Below the photos are the shelves that hold Mohamed’s tools of the trade – salvage yard scraps with a dose of plastic figurines and dollhouse furniture pieces. Mohamed, whose home is Damascus, hopes to bring the humanitarian plight of his people to the world through his art.

Bombed out buildings, an abandoned tricycle tipped against half a stone wall, cars burnt and hollowed, and a family’s art work singed and blackened by smoke, are just some of the miniature models nestled inside old leather suitcases, which, for the artist represent the fleeing of a people, taking only what they can carry. “My family has left Syria, and my sister and her husband have become refugees in Sweden.  As a middle class family, this is the last thing I could ever imagine happening. What we are now trying to do is both humanize the crisis and defy the current narrative regarding refugees.”

Guido Garaycochea, an abstract painter, originally from Peru, splits his time between New London and Queens, New York. As an immigrant who is now a U.S. citizen, he has experienced first hand the fear of his neighbors in New York. “For weeks after the inauguration, people were not even going outside.  Everyone was locked away in their homes for fear that they would be swept up and sent back.  It was so scary; and even though I am a citizen now, I understand what it is like to live with that fear. It seems that fear of what we don’t know or understand is at the core of our current situation when it comes to immigrants. No human is illegal, and this country has always been a place for immigrants to reinvent themselves and bring our talents to this country.”

Intersections, A Benefit Exhibit, seeks to show the world through art, that despite the differences in our races, our religions, and our cultures, we are more alike than we are different; and as Americans we have always prided ourselves on the diversity of our people.  David Tedman Martinez, an artist who works in abstract, says that the exhibit is a way for the artists to come together to illustrate the immigrant experience using art as a way to express the emotional rollercoaster that is currently felt by undocumented people in our country. 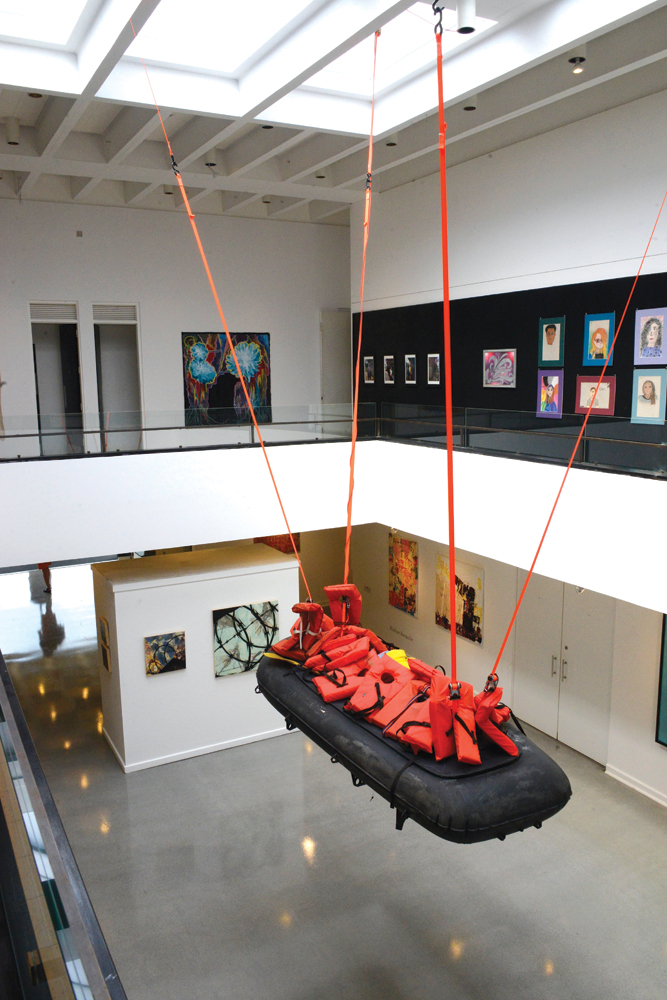 The idea for the exhibit stemmed from a conversation between Martinez and the Immigration Advocacy Support Center, or IASC, an organization that began as a way of helping the growing population of underserved Hispanic families in the New London area.  The artists have all signed on to donate half of the proceeds from any artwork sold  to IASC to support their ongoing effort to help assuage some of the fears felt by current undocumented workers.

Getting Connecticut College onboard has been the bridge that brought it all together.  Chris Barnard, an art professor at Conn, brought the project to his department because he understands the imperative nature of having these conversations now.“We were told of Martinez and the fact that he is a painter as well as an educator in New London.  The idea of combining not just a show of artists who are all immigrants, but being able to use the show as an educational tool, was a very powerful idea; and we wanted to make it happen.” Barnard was eventually able to get the green light from his department, and the process of inviting the artists began.

Corina S. Alvarezdelugo, currently calls Connecticut her home, but she is originally from Venezuela.  These days when she sees what is happening in her beloved country, it is heartbreaking; and she fears that the current unrest in this country creates the fear that causes such destruction.  She has contributed work that represents her current emotional state regarding her homeland. “The work I selected is about the political situation in Venezuela.  It is about the loss of freedom and what the regime is doing to people in my country.

For Corina, having this show at Connecticut College is hugely important. “For it to be happening in a college is personally very important for me because right now in Venezuela students are being imprisoned, tortured, and killed for demanding what it says in our constitution.  I want students here to understand how important it is to take care of the things that they have, like freedom, because very easily it can go the other way.” 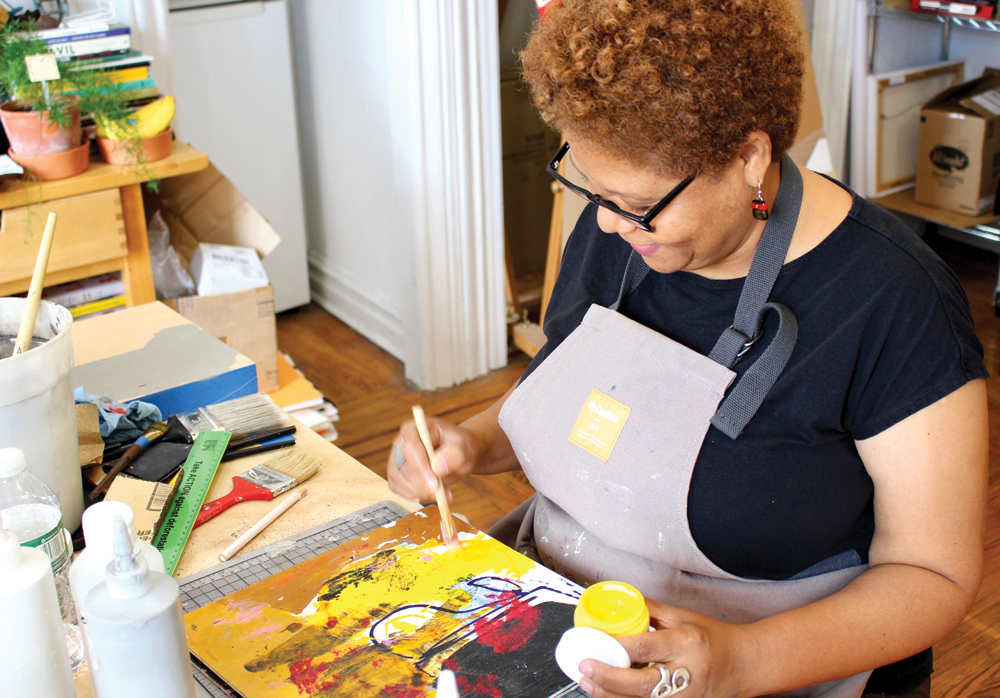 Nadine Renazile, an abstract and mixed media painter, was part of the Haitian diaspora, and her artwork tells her story of the feeling of being an outsider.  She explains her passion about the topic. “The act of immigration offers an opportunity to remake oneself, even as one is in the throes of a profound sense of loss for leaving behind home and community. I was thrilled to offer my art in support of those going through that process while engaging with the public through the lenses of a longtime observer of American life. Showcasing immigrants from different backgrounds, different countries, and our contributions to this great nation is very important for me.  I work with young people and artists to help encourage and build their confidence through art.”

Nadine’s words ring true for Rafael Colon, an artist who came from Puerto Rico at the age of eight to live in the Bronx with his mother.  Having come from a poor community where neighbors took care of each other to land in a new world whose language he did not speak and where neighbors avoided each other, Colon knows all too well what it feels like to be an outsider looking in. He uses his art as a universal language and hopes that those who see the exhibit will understand the healing power of art. “I would like people to see that no matter where you come from or where you live, art can transcend that. Art can make you feel familiar, make you feel inspired, and make you understand the power of creativity no matter your heritage. A Picasso for example, can transcend countries. A Japanese person will know it as well as a Swedish person. Art pierces and breaks barriers and can unite like-minded humans for one cause.”

Intersections, A Benefit Exhibition for IASC will run through October 12th. Fields of Dreams Carriage Museum – Each One Has a Story