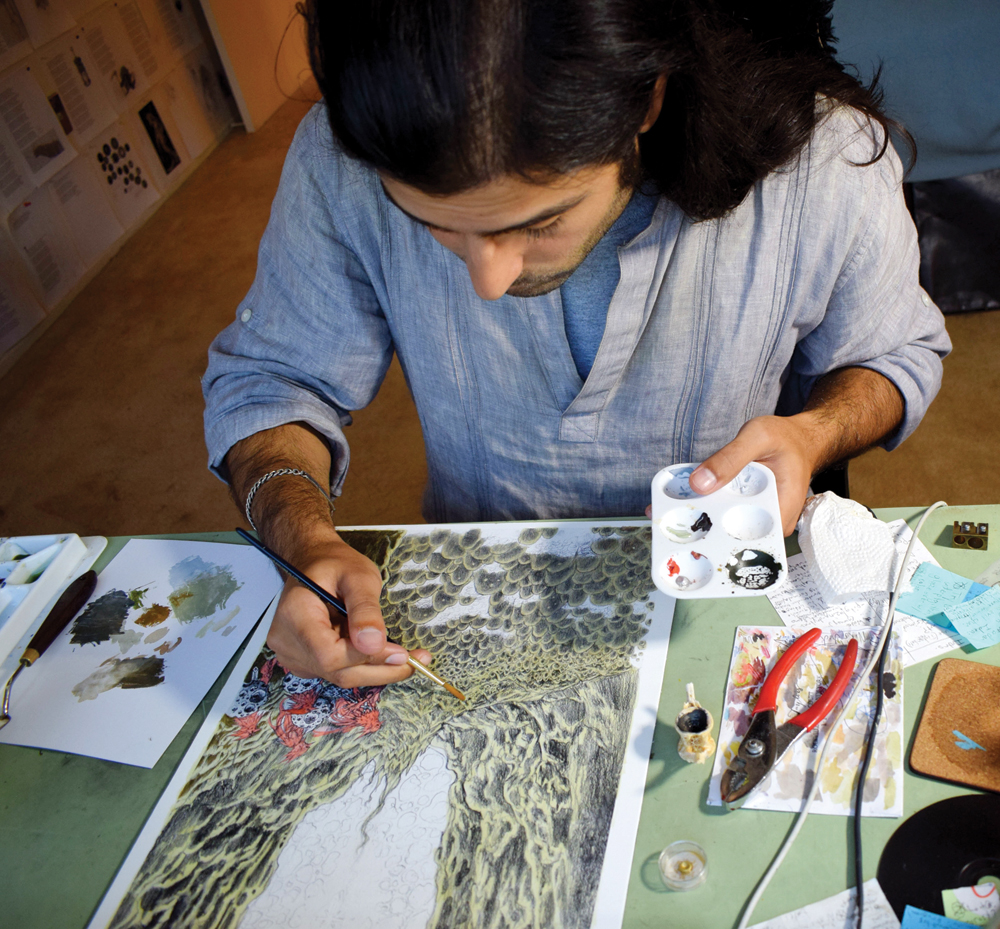 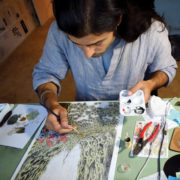 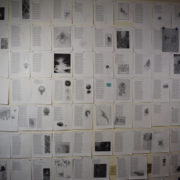 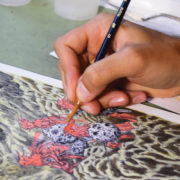 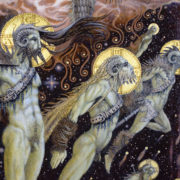 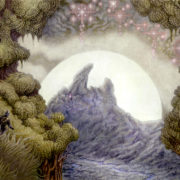 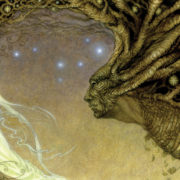 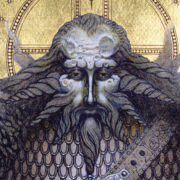 Close listening to illustrator, poet, educator and visionary Jon Sideriadis is a passport into Astromythos, his own mythological world projected eons into the future, although firmly planted in the ancient tradition of classical art and story telling.  The title is Sideriadis’ own creation, and is a combination of the Greek words for star and myth. Sideriadis spent a lifetime in preparation for this expansive work, and set out on his own personal odyssey as a young man and perennial student. During this extensive journey, he absorbed a vast mix of astrophysics, Joseph Campbell and the Classics, an ongoing immersion in his ancestral Greek culture and traditional art, Sci-Fi, Shakespeare and J.R.R. Tolkien. A stint in Hollywood designing creature effects, makeup and range of commissioned work for television and film, along with years of international travel, laid the foundation for an unparalleled vision. 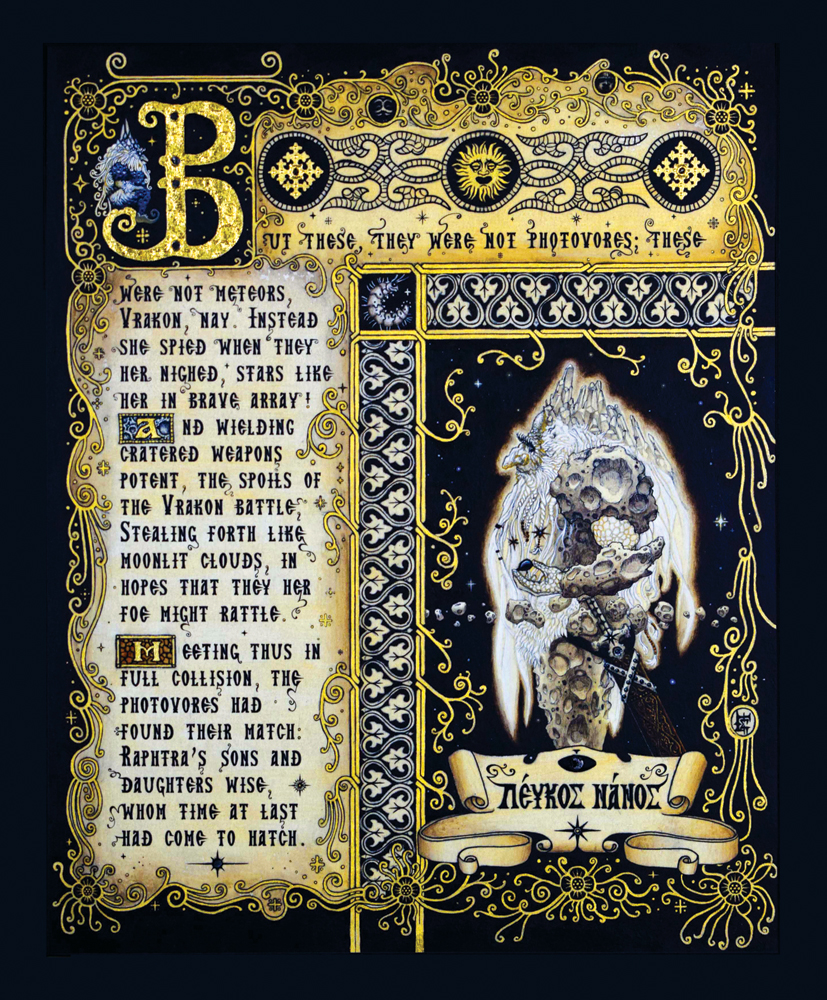 Sideriadis’ first volume in his multi-volume series is presented as an epic poem comprised of twelve myths containing “anthropomorphic” treatment of the stars, planets, meteors and other heavenly bodies in the celestial world; i.e. giving human characteristics to animals or inanimate objects. Astromythos is the refinement of eleven years of dreams, adventures, observational notes and a library of the artist/poet’s meticulously illustrated sketchbooks. The sketchbooks are intrinsic to Sideriadis’ creative practice and he has carried one with him since he could remember. He encourages his illustration students at both Lyme Academy and UCONN to follow his example and record all of their impressions as they occur.

Sideriadis invites you into his deeply illustrated and most definitely ambitious world. If the written work feels somehow familiar, it intentionally runs parallel with Homer, the Iliad and the Odyssey – and is crafted in rhyming hexameter, the identical meter as the Hellenic epic. With a vast store of folktales and myth from other cultures he also blends Norse mythology into the storyline.

He takes his time explaining the romantic stuff of his own multi-generational odyssey. There is his maternal Grandmother who was a shepherdess tucked into a remote mountain village in Greece and the Grandfather who came back to his homeland to find a suitable wife. His parents settled in Rocky Hill and once he arrived in school, his natural artistic talents emerged, were discovered and nurtured with travel, education and limitless enrichment encouraged.  His interests in heroic adventure, Dungeons and Dragons, and Star Wars also staged the proving ground for his future work and unlimited imagination. As his work matured and expanded, there is also a nod of admiration to Hudson River School artist Thomas Cole, as well as, painter John Martin. Sideriadis is mindful of the positioning of man in relation to nature and feels, “the figure is subordinate to the environment.” 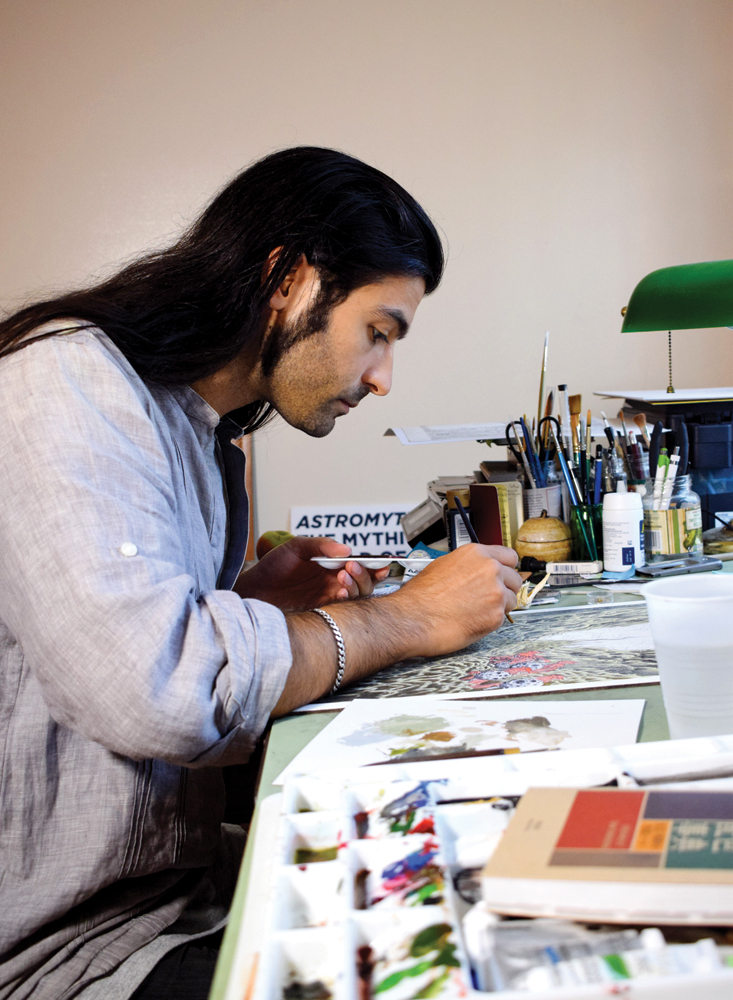 Visiting his studio in late afternoon, the original gilded artwork is a soft glow of gold and silver, even in the dim light. The spare worktable is always in process and Sideriadis talks animatedly about the selection of his picture frames that intentionally decompose and rusticate to mimic an ancient quality. His choice of metal leaf also reflects a temporary and organic quality that will age over time and transform. The work has transformed as well since he began, and he had to rewrite the entire first half of the book when he revisited it.

The galley copy and detailed illustrations – beautifully gilded illuminated manuscripts, which are easily mistaken for ancient Byzantine works – consume a solid ten-foot span of wall in his workspace. His attention to detail and authenticity in this epic is confounding. Look twice at the incorporation of an actual meteorite set directly into the gilded letterform “B” in one illustration. It was a Guilford based blacksmith who encouraged Sideriadis to reshape the meteorite. “The nickel and iron content will cause it to melt poorly…you’ll have to shape it.” A stickler for detail – and tools – he used his father’s 30-pound press to flatten the meteorite and a Dremel to further refine the shape. All of this effort to incorporate the element of gravity into the story and animate it on the page! Gravity factors heavily into the plotline, and Sideriadis explains that, “…it is a powerful influence and can be viewed either as destructively dark, or, as a catalyst for a new beginning.” He cites the positive pull as, “the first two stars meeting together in the void”.

When he travels back to Greece each year, he stocks up on the metal leafs and paints that enhance the work. The trip has expanded in scope, and as of last summer, Sideriadis  – who is bi-lingual in both written and spoken Greek ­– has joined the leadership team for an immersive educational trip for artists. The adventure leads travellers throughout the Greek Islands while retracing the steps of ancient thinkers and transforming spirits at the foot of Mount Olympus or while painting in a Greek castle.

The longer you take time to view his work, you want to ask more and stay longer. There is an eagerness to see what happens next to the meteors, the brown dwarf stars and the dark forces of worm and black holes. There is also the love story of the two stars Arnikos and Nevma, who are caught up in a tragic push pull; the bravery of the wisest of the stars – the nomadic white dwarf stars – in search of a home; and the humor in the whimsical inset illustrations of the natural elements which remind you of Tolkien. There is Lithium, the volatile trickster, Oxygen and the levity of Helium. Always the instructor, Sideriadis is purposeful   to make his work relatable to our current social climate and adds in recognizable metaphors and kind lessons as the takeaway. 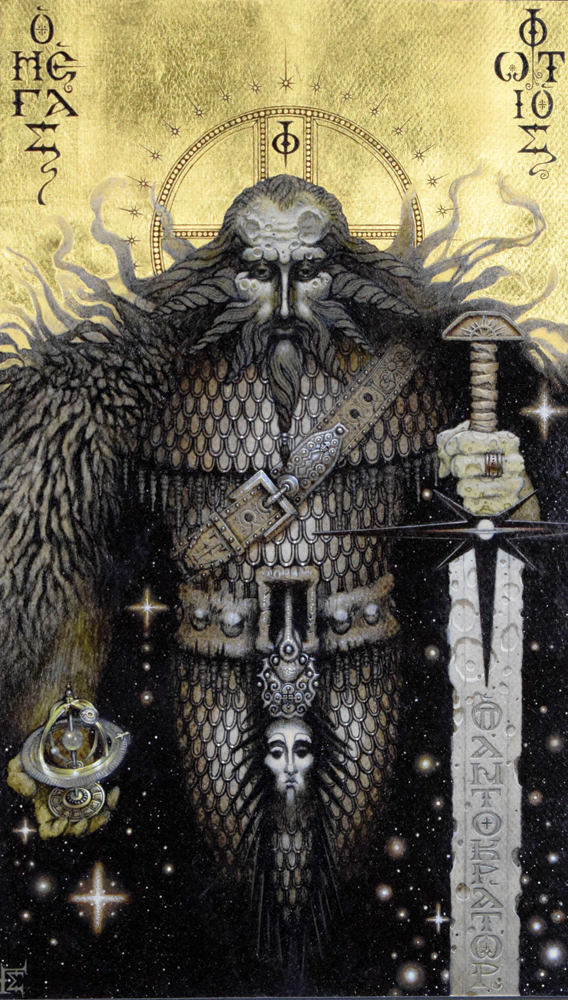 With the current emphasis on instant gratification and fleeting ideas, Astromythos and the years spent planning and creating it may initially feel foreign in their scope and attention to detail. This may be a lifelong pursuit to finish the entire work, but this commitment is at the root of a mythic quest. The words and visuals are oddly classical while exciting and futuristic. The language encourages the reader to slow down to ancient ways – before the urgency of pop culture – to read and re-read each passage and look again at the detail embedded in each illustration.

The dedication to his process is infectious and his students fill his classes each semester. Teaching a course called, “World Building” for artists, proves an intricate and exciting exercise in thought and creativity for establishing the foundation for their own mythical works. In the course, he encourages his students to live inside of their imaginary worlds and “eat, sleep and breathe” inside them to make the story, characters and details believable enough to be effectively shared with others. He asks tough questions of his students and begins the class with “How say you now” to provoke fresh thought and be inspired in different ways.

There are a handful of pieces in progress in the studio and carrying them out to the car we talk further about technique and the small details that make a difference in the slightest change of tone and feeling: how the little female white dwarfs wear their wings; the slightest dusting of silver powder into the oil paint to create just enough moon dew and the little clutch of gold rings in the palm of the birdlike gas giant used in hope of wooing the first star. There is a snatch of an epic poem of the Finnish people – the Kalevala to think about as the streetlights go on and the modern world trips over the evening and the characters of Astromythos are just over the horizon and you drive off knowing you’ll dream of hydrogen fireflies.