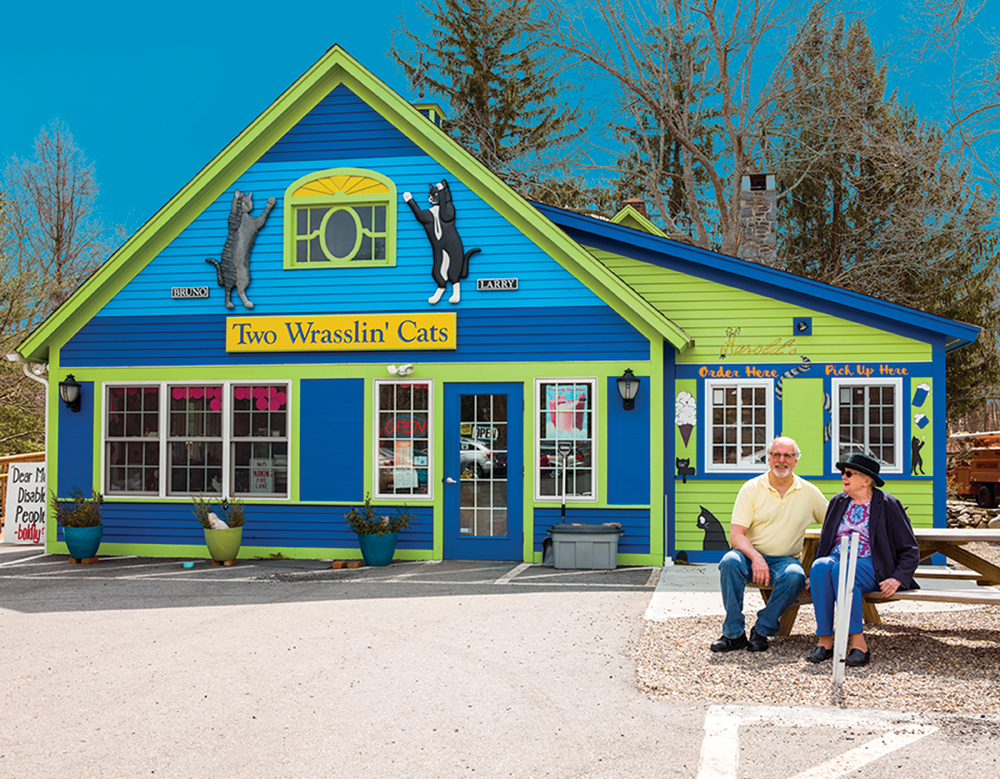 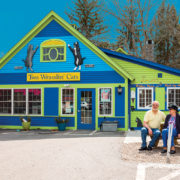 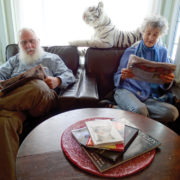 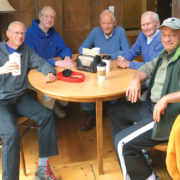 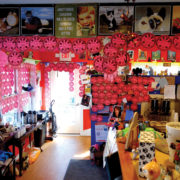 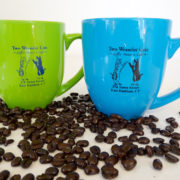 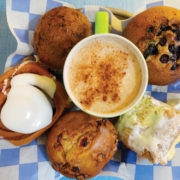 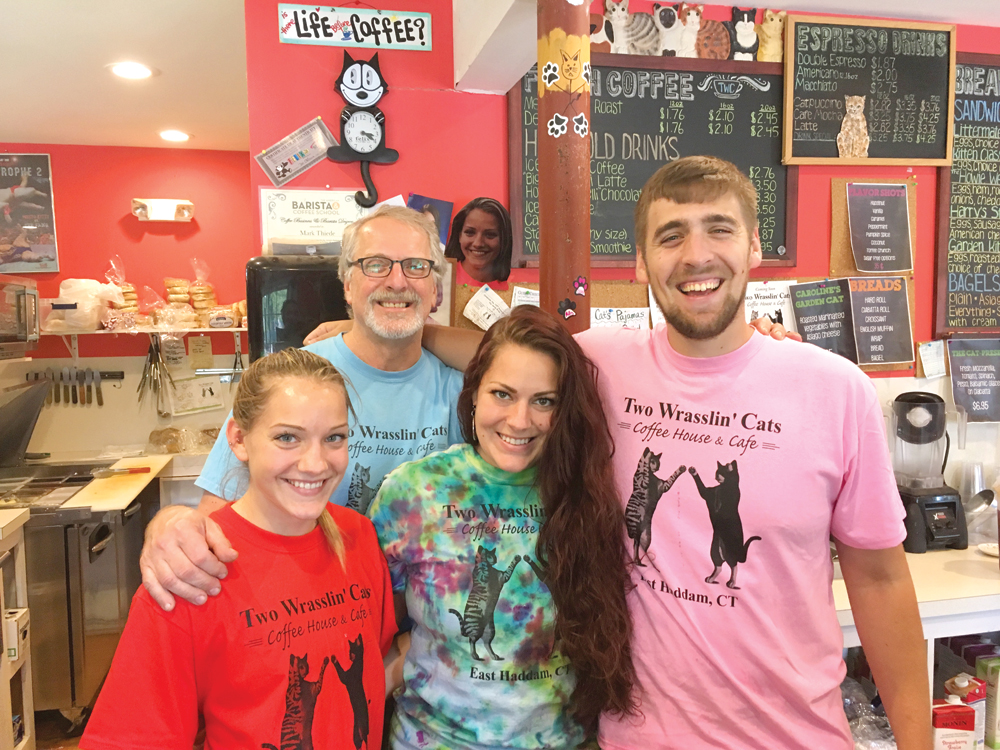 The sign on the house showing cats on their hind legs, poised for “battle,” says this is a coffee house and cafe, but in reality that’s secondary. What’s primary is the fact that this is a kind of community center for the East Haddam-Moodus-Salem area. This is a “sanctuary restaurant,” according to affable owner, Mark Thiede, where there’s “always a place at the table for everyone.”

Fact is, everything about Two Wrasslin’ Cats is unique. Begin with the fact that it’s owned and operated by a PhD in Molecular Biology, a man who spent most of his  working life in large pharmaceutical corporations, a man who by his own admission, “knows nothing about business.” A man who isn’t terribly interested in material things; just in making a warm and welcoming place for his community; not just to eat and drink, but to convene, host meetings, poetry readings, art exhibits, open mic evenings …with no rental fee nor food and drink minimums! Here is a man who is totally comfortable in his own skin and just wants to share this joy with others.

Two Wrasslin’ Cats is a perfect example of the two adages, “it’s not what it appears to be” and “take a second look.” You can’t miss the bright blue house, an antique Cape circa 1784, prominently sitting at the intersection of Rts. 82 and 151 in East Haddam, just a mile or so up the hill from the Goodspeed Opera House. And you sure can’t miss that logo of two cats engaged in playful feline wrasslin,’ a logo owner Mark Thiede proudly tells you he created and has now wisely trademarked. 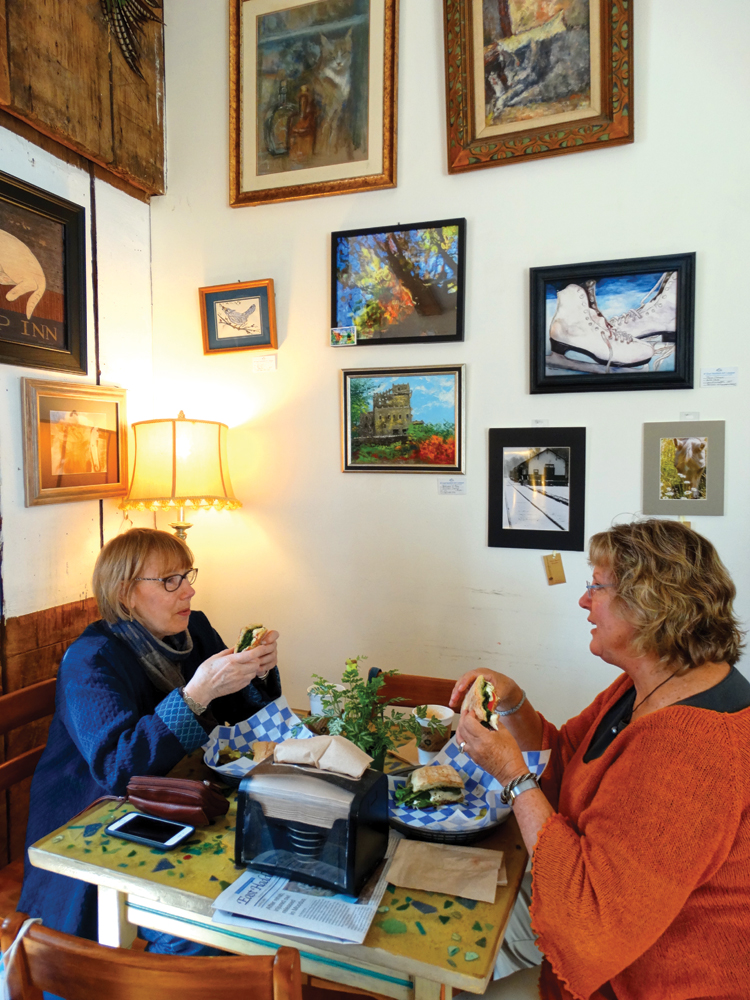 Enter the historic home and what you see is not what you get. There’s a small counter, the aroma of delicious coffees and espressos mingling together to seduce your senses, and there are muffins and scones, bagels and coffee cake, cookies and cinnamon rolls along with a blackboard announcing daily specials, soups, and sandwiches. Two Wrasslin’ Cats is open each day from early morning till 5PM, serving breakfast, lunch, snacks, and even homemade ice cream from nearby Salem Valley Farms. But that’s just the beginning and far from the whole story.

Next you’ll probably meet Mark Thiede, he the PhD who knows all about pharmaceutical research, but little about business…he’ll be the first to tell you that! Listen to Thiede talk about Two Wrasslin’ Cats, his philosophies, and his willingness to help anyone of any stripe, and you might imagine him a child of the ‘60s, complete with graying ponytail and Birkenstocks. Uh-uh. Not so.

Adorning that counter, and indeed throughout the entire space are cats, cats, cats. Figurines, toys, cartoons, double entendres, and triple fun. Yes, the man enjoys his cats, especially “Larry” and “Bruno,” his personal felines and the“wrasslin’” inspirations for the name of the place…but here too, it’s not what it first appears to be. This is not just a cafe with a cute theme and “crazy cat people” who frequent it. “Actually most of the cat stuff now comes from our customers,” says Mark. “People are always coming in and bringing me cat-themed decorations, so I put them up.” But Thiede is more about the sense of community a coffee house creates and the special sense of community that Two Wrasslin’ Cats has come to represent in the river towns that surround.

Right now the cafe is engaged in collecting funds for the Meals on Wheels program at the Senior Center and hopes to reach Thiede’s goal of $3000. this month, but there’s always a cause or two; and Two Wrasslin’ Cats is always right there to support them.

Thiede tied of corporate life and no longer wanted to compromise. When Pfizer (his then employer) offered $5000. for continuing education, he realized that with his PhD there was really nothing more he wanted to learn in his field, so he took the money and went off to “Coffee School” in Portland, Oregon. There Mark learned every phase of running a coffe 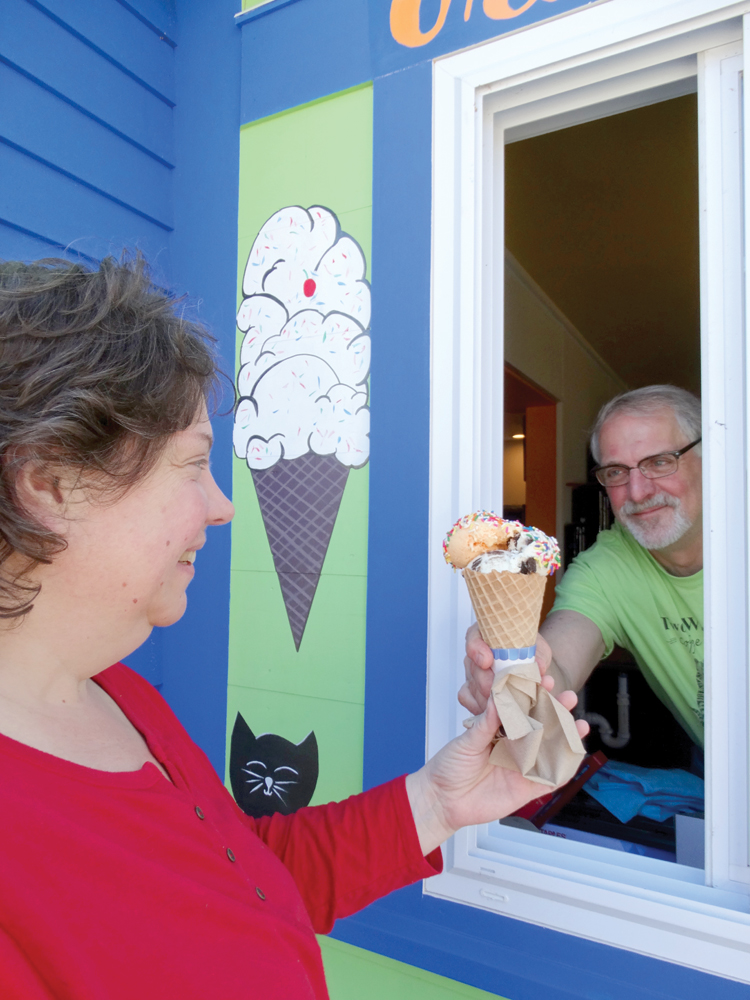 e house from the business side to how to buy and operate espresso machines. He learned about hot and cold coffee drinks, frozen beverages, chai and smoothies. Then he packed up, left the button down corporate world, and became a barista.

Two Wrasslin’ Cars has a series of “private” rooms in the back of the house, just perfect for those community meetings, small parties, Open Mic nights, and performances in season by cast members from the nearby Goodspeed Opera House. Each Saturday the parking lot fills from 10-11AM for what he calls “the vigil.” Started by a local woman and called, “Together We Rise,” the vigil is a non-partisan, non-violent gathering of individuals of all ages and backgrounds who believe in diversity, first amendment rights, religious freedom, women’s rights, and unification of all people. “When she asked if they could meet here weekly, I said ‘sure,’” Thiede offers. “The first week we had 500 people in our parking lot!”

Anyone who frequents Two Wrasslin’ Cats for even a visit or two will quickly come to realize that this place is not about the lattes, the smoothies, the “catpuccino,” or the sandwiches. It’s about a man with a social conscience who chose to eschew the financial comfort of the corporate world and follow his own path.

“I’m 61 now, and I can do what I want. I don’t need much. I had a great career. Now I just want to have a place I like open to anyone for their activities, a vessel for the community. A place for the Daisies to convene and the politicians to Meet and Greet, where the Art League can display their work on my walls, and Narcotics Anonymous can feel comfortable having a quiet place in the evening to meet. I do a lot for my community because it’s just natural for me to do it. Everyone’s welcome here. That’s it, and I’m going to hold my ground.”

And anyone who disagrees with this man, possibly the happiest, most content guy in East Haddam, should probably just engage Thiede in a wrasslin’ match. You’d lose.

“My Mother Had No Eyebrows!” The Backstory behind A Nu Yu Studio