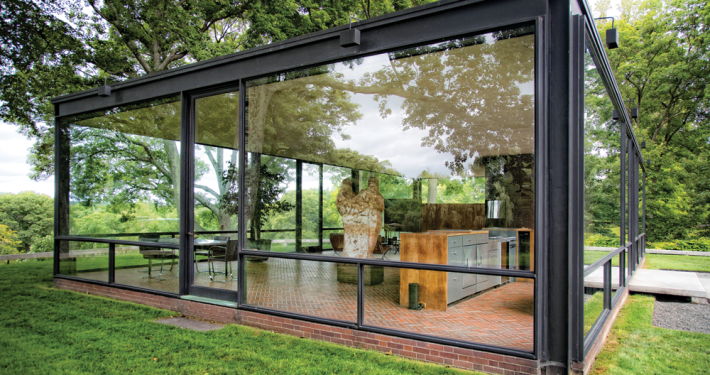 Philip Johnson lived his life by this simple philosophy, and it is evident in the many noteworthy structures he designed during his lengthy career as an architect. Nearly every major city across the United States has one of his skyscrapers, libraries, theaters, art museums, chapels, banks, or educational institutions. From the John Fitzgerald Kennedy Memorial in Dallas, to the Neiman Marcus Department Store in San Francisco, to New York’s Four Seasons Restaurant, the Lipstick Building, the Abby Aldrich Rockefeller Sculpture Garden at the Museum of Modern Art, and the Seagram Building, co-designed with his mentor architect Mies van der Rohe, Johnson leaves behind a cultural legacy evident in these Modernist, Postmodernist, and Neo-classicist forms.

“As an architect, he made his mark arguing the importance of the aesthetic side of architecture and claimed he had no interest in buildings except as works of art. Yet he was so eager to build that he willingly took commissions from real estate developers who refused to meet his aesthetic standards,” wrote Paul Goldberger in Johnson’s obituary published in the New York Times on January 27, 2005.

And while some of Johnson’s edifices also signify his contribution in helping to establish Modernist architecture in this country, it is his private residence, the Glass House, which reveals a different story in his commitment to art and design, his quest for beauty, and his desire to build for building’s sake.

The Glass House, now a National Trust Historic Site open to the public, sits perched upon a promontory surrounded by 49 acres in an area of New Canaan, Connecticut  known as Ponus Ridge. The house, accompanying structures, follies, and sculptures sprinkled across the lush landscape are seamlessly integrated into the natural environment, which consists mostly of woodlands and meadows.

The Glass House was built in 1949 and is comprised of glass, steel, and brick. It is a 1728 square foot rectangular shape measuring 56 feet long by 32 feet wide. Obviously, since you can see right through it, the occupants would have been fully exposed; but because of its setting, it remains perfectly private. It has no interior walls except for a floor to ceiling brick cylinder serving as a lavatory; and yet the “rooms” are clearly delineated by the placement and choices of furniture, which were designed by van der Rohe. While it feels simple and sparse, it is well appointed with everything one needs to live comfortably, yet nothing more…or less. It is well balanced yet minimalistic.

Although there is a seventeenth-century painting entitled Burial of Phocion by Nicolas Poussin in the living room, and a grand sculpture by Elie Nadelman called Two Circus Women between the kitchen and dining area, the real artwork is in the way the natural world reflects itself upon the glass, constantly changing with the seasons and weather, light, and time of day.

Johnson split his time between his New Canaan residence and New York apartment until he occupied the house permanently with his life partner and creative accomplice, David Whitney, who was 33 years his junior. The duo remained together for 45 years until Johnson’s death in 2005 at age 98, with Whitney following a mere five months later after succumbing to lung and bone cancer.

Whitney was an avid art collector, curator, critic, and gallerist. He studied architecture at the Rhode Island School of Design and met Johnson who was delivering a lecture at nearby Brown University.  Whitney worked at the Museum of Modern Art, the Green Gallery, and the Leo Castelli Gallery in New York before opening his own in 1969, nine years after meeting Johnson. He exhibited many great artists of the day and later organized exhibitions at the Whiney Museum (no relation) for Cy Twombly, Jasper Johns, Franz Kline, Willem de Kooning, and Andy Warhol who became a close personal friend and frequent visitor to the Glass House. (Warhol’s 96×96 acrylic and silkscreen inks on canvas bearing nine squares that repeat Johnson’s likeness, still hangs on display in the onsite Painting Gallery Johnson designed in 1965).

From 1949 to 1995, Johnson added more buildings to the property, each varying in design. The 3778 square foot Painting Gallery was created to exhibit the art collection the couple had amassed. The Gallery exterior is “a grass-covered mound, topped by a low parapet with a monumental stone entrance”.  The interior of the bermed structure is underground and mirrors the Grecian tomb, the Treasury of Atreus, after which Johnson fashioned it.  Inside the circular rooms are large moveable panels ranging in size from 137-139 feet tall by 103-197 feet wide. Hanging upon them are pieces by contemporary artists like Frank Stella, Cindy Sherman, Robert Rauschenberg, and others.

As their art collection continued to grow, Johnson designed a Sculpture Gallery to exhibit the three-dimensional works. Once again, he took his inspiration from the Greeks. He made a multi-leveled open space connected by a series of brick walkways similar to what one would see in an island village. The glass ceiling enables the light to pour in freely, while the tubular steel rafters that keep the glass securely in place create their own artwork by casting intricate, linear patterns of light and shadow across the room on sunny days.

Prior to these two structures, Johnson built the Brick House as a companion to the Glass House. It is made up of the same materials – brick and glass – and is the same length, but only half as deep. It served as a guesthouse with a bedroom, reading room, and bathroom, but is much more private with only a few round windows and skylights. It is currently undergoing an extensive restoration and closed to the public.

After the Brick House, Johnson completed a pavilion overlooking his manmade pond. Here amongst the cattails, he hosted sumptuous picnics inside this multi-columned, Italian inspired, garden folly.  Over twenty years later in 1985, he added the Lincoln Kirstein Tower (named for his friend) to this area. The tower was meant for climbing even though the steps inside were intentionally designed to “foster a sense of imbalance.”

“Placed in the landscape to make a point of interest, it punctuates the panorama from the house,” wrote Johnson in 1993 in the preface to Philip Johnson: The Glass House, edited by David Whitney and Jeffrey Kipnis.

The Library / Study was completed five years earlier, and was a place where Johnson could work and house his anthology of art, antique, and rare books.

“He found working in the Glass House too distracting, so he created this one use structure in 1980. He always made excuses for designing these structures. He just liked to build,” says Irene Shum Allen, Curator and Collections Manager at the Glass House.

The last building Johnson constructed in 1995 he dubbed Da Monsta, because it reminded him of a monster in its unconventional shape. It is now used as the on-site visitor orientation center, though the main visitor center is located in town to minimize traffic and the need for a parking lot, which would have disturbed both the neighbors and the landscape.

Johnson and Whitney had the foresight to safeguard and share what they created by donating it to the National Trust for Historic Preservation. The couple also gifted over 2200 paintings, sculptures, models, graphic art pieces, and other objects to the MoMa where Johnson had been the first director for their newly established Department of Architecture in 1932.

The Glass House opened to the public in 2007 and over 15,000 people visit annually. As part of the Trust’s commitment to preservation, all 14 structures on the property along with the permanent art collection are continually being stabilized, restored, and conserved as needed.

In keeping with many influential artists, designers, historians, curators and architects that visited the Glass House during its heyday, it remains a place where students, educators and creatives can converge to learn, explore, discuss and exchange ideas through the many programs, projects, symposiums, lectures, performances, readings and art exhibitions presented. For example, the Glass House Conversations is an onsite and online dialogue where moderators from a variety of disciplines pose a design related question or debate topic. Participants have up to two weeks to respond. Thus far, over 20,000 people from 150 countries have contributed to the conversations. This is but one of many cultural endeavors the Glass House hosts in an effort to remain “a catalyst for the preservation and interpretation of modern architecture, landscape, and art and a canvas for inspiration and experimentation honoring the legacy of Philip Johnson and David Whitney.”

“But that, of course, is what the entire estate is: a series of architectural explorations and mental entertainments – or is it a series of architectural entertainments and mental explorations? Either way, this is an extraordinary record of a great   architectural mind, operating with curiosity, inventiveness, and passion, not to mention a degree of freedom that is rare in any age. It could not have been built by anyone but Philip Johnson, and there is no place else like it,” wrote Paul Goldberger in his introduction in The Glass House. 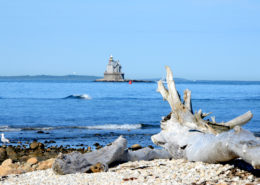 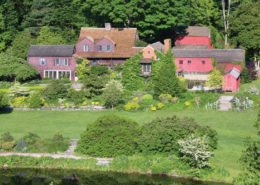 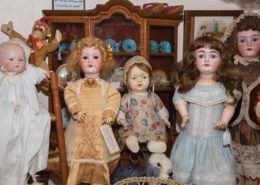 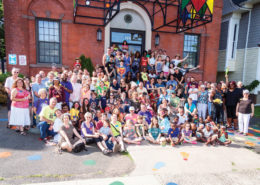 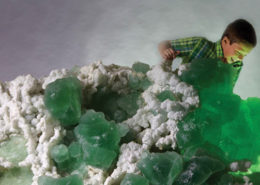 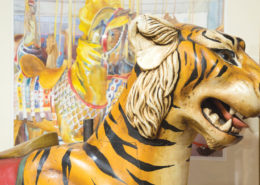 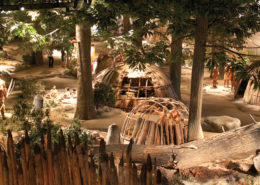 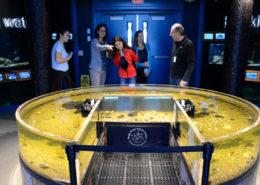 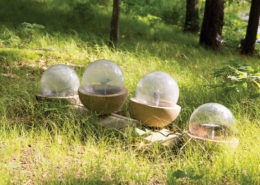 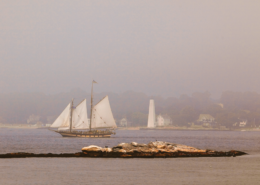 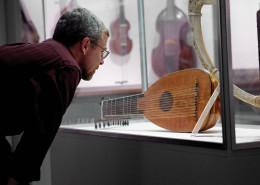 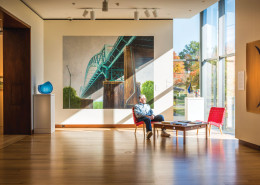 • The Legend that is Friends & Company
Scroll to top
X