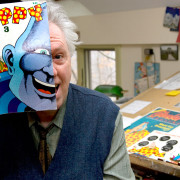 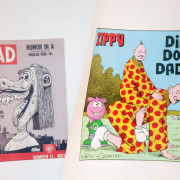 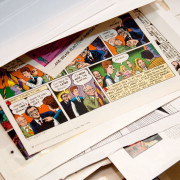 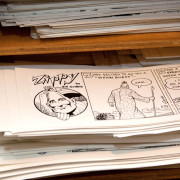 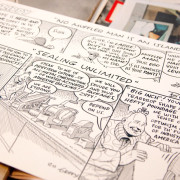 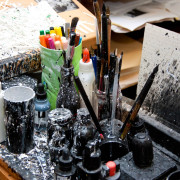 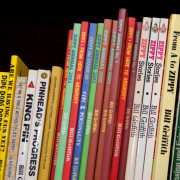 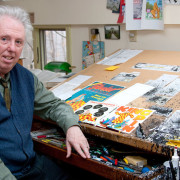 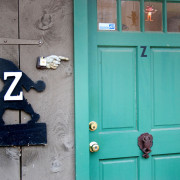 The Man Behind Zippy the Pinhead – who Is Bill Griffith?

Photos and profile by Caryn B. Davis
­ “Comics are a language. It’s a language most people understand intuitively.”
– Bill Griffith

Cartoonist Bill Griffith became acquainted with pinheads after seeing the cult classic “Freaks”. The film featured a real life pinhead played by Schlitze, a sideshow performer. This made a lasting impression on Griffith. Though at that time he could not have imagined this muumuu-clad character would later become the impetus for his comic strip “Zippy”.

Schlitze was born with a microcephaly, a disorder that impedes the growth of the skull so the size of the head is disproportionate to the size of the body. People with this condition also operate in a state of arrested development making them very childlike. Their qualities of being excitable, with active imaginations, large vocabularies, and speaking in bursts of seemingly unrelated sentences, appealed to Griffith who early on had cultivated a taste for the bizarre, from reading MAD Magazine and other comic books.

“What attracted me was the fact that this person was human but seemed like an alien in some way, as if they dropped in from some other reality,” said Griffith.

Griffith grew up in Levittown, Long Island where every house in his neighborhood was identical on the inside and out. His only saving grace in a community where individuality was considered abnormal was his neighbor Ed Emshwiller. Emshwiller was an illustrator of science fiction magazine covers and an experimental filmmaker. Griffith spent hours at Emshwiller’s, modeling with his family for the sci-fi covers, and assisting him with his films. Emshwiller inadvertently taught Griffith you could make a living doing something you cared about, regardless of how unconventional it may be. 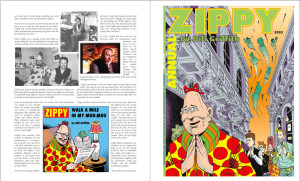 “It drove me to want to be an artist. He did not leave the house to go to work. He went upstairs to his studio,” Griffith said. “I loved that he lived in Levittown, a place where everybody was uninteresting, but yet here was this fascinating guy next door.”

When Griffith was a teenager in the early 1960s, he started taking the train into Manhattan to attend poetry readings and folk concerts. He knew he was unlike other kids his age, and was seeking validation. He found Greenwich Village to be filled with off-kilter people like himself. “I knew I was different, but I wasn’t uncomfortable being different. My role models did not have to be financially successful just interesting and weird,” said Griffith.

It was an exciting and creative time to be in New York. The counterculture was finding its voice through music, art, protest movements, and comics in underground newspapers that published the works of cartoonists Robert Crumb and Gilbert Shelton. These alternative papers gave Griffith his first shot. “If it weren’t for them I probably would have never become a cartoonist,” said Griffith.

Griffith had attended Pratt Institute in Brooklyn and was concentrating on   becoming a fine art painter. On a dare from a friend he submitted a strip to an underground paper. Much to his shock and delight, it was published. Although it had no storyline, it had surreal merit and was drawn to the correct proportions, which was something the papers were not used to but appreciated.

“I went to the newspaper office to get copies. I asked how many get printed and they said 10,000. I thought, ten people might see my paintings but 10,000 might see this. That was the end of my painting career right there,” said Griffith whose character Mr. The Toad was subsequently published in East Village Other and Screw. 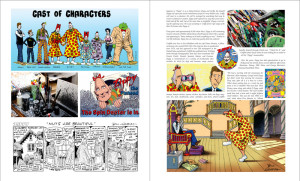 In 1970, Griffith left New York for San Francisco where the underground comics movement was flourishing. There he met Robert Crumb, Charles Schulz (“Peanuts”) and Art Spiegelman who won a Pulitzer Prize for his graphic novel, Maus. Together with Spiegelman, Griffith co-founded Arcade, a comic anthology that paid tribute to the work of many underground artists.

“Zippy” came along in 1971 and made his debut in Real Pulp #1 (Print Mint). The name for the strip was derived from “Zip The What Is It” who had worked with P.T. Barnum. (Zip was hailed as a pinhead because of his odd shaped skull, though some believe he was not a true microcephalic.) Zippy’s costume mirrored Schlitzie’s muumuu but sported a puffy collar. His personality was pure pinhead.

“Zippy embodies a fractured attention span in an extreme form. But its not that different than the average teenager. It’s very hard and maybe not even desirable anymore to stay with one particular thing for very long,” said Griffith. “The minute you are on your computer you are literally being led from one link to the next. It makes sense to the person following the links, but if you were to see the series of links they went to, it could seem very random. That’s the way Zippy relates to the world.”

Griffy, Zippy’s counterpart, was developed to keep Zippy from going so far out that nobody would be able to understand him. Zippy and Griffy are a combination of the cartoonist’s split personality. Griffith is both the opinionated, cranky guy (Griffy), and the childlike accepting guy (Zippy).

“The way the social commentary happens in “Zippy” is as a dialog between Zippy and Griffy. By himself Zippy can’t give you social commentary except in a very oblique way. Griffy will react to a situation. He will be outraged by something that may be social or political in content. Zippy will respond in a way that seems unrelated and off the wall, but at the same time is insightful. Zippy is not taking the opposing view. He’s just accepting it. Griffy doesn’t get angry with that. He knows who Zippy is.”

Forty years and approximately 8,000 strips later, Zippy is still consuming massive amounts of MSG infested food, absorbing pop culture like a sponge, and appearing to “know nothing at all and everything at once.” Similar to real life pinheads, Zippy has an endearing quality that has endured. 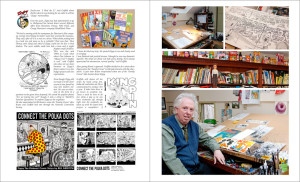 Griffith now lives in East Haddam with his wife Diane Noomin, a fellow cartoonist who created DiDi Glitz. His strip has been in syndication since 1976, and has appeared in over 200 newspapers in the United Sates and abroad. Griffith has published over 30 Zippy books through Fantagraphics that have been translated into French, Dutch, Finnish, Spanish, Italian, and German. Zippy is immortalized on a variety of merchandise that includes tee shirts for dogs and humans, mugs, posters, stamps, bumper stickers, aprons, stickers, key chains, dolls, tote bags, magnets, ties, hats, skateboards, cards, calendars, and shoes, which Griffith handles himself through Zazzle.com. “I liked the Z,” said Griffith about Zazzle when he was looking for an outlet to sell his “Zippy” memorabilia.

Over the years, Zippy has had opportunities to go to Hollywood but turned down several different offers from Showtime, Disney, NBC Films, and George Harrison’s company HandMade Films.

“We had a meeting with the moneyman for Harrison’s film company. George loved Zippy but didn’t want him wearing the muumuu. They said, after all it is a man in a dress. What about putting him in a tank top and jeans so he is relatable? That was that. Then Disney came along and asked if Zippy could lose his five o-clock shadow. The razor stubble made him look a bum and it might frighten small children. This was the mid 1980s so I said, what about Don Johnson in “Miami Vice”? Stubble is cool,” said Griffith who does not see show business in Zippy’s future unless it is a low budget project with low expectations.

Even though Zippy did not make it to the silver screen he has found his way into modern culture. He was on television in the form of a question on the game show Jeopardy. He coined the popular phrase “Are we having fun yet?” though it took a citing in “Bartlett’s Familiar Quotations” to confirm Zippy as the originator.
He also materialized in Bil Keane’s comic the “Family Circus” after Keane and Griffith had met through the National Cartoonists Society.

“I knew he liked my strip. He quoted Zippy to me and clearly read it everyday.
I was flattered and puzzled because I thought he was my diametric opposite. His strips are about cute kids and a family, but I always appreciated its unconscious, surreal quality,” said Griffith.

Griffith still draws all his strips by hand using pen, India ink, and white out. He is commissioned to produce 365 a year. It takes him three to six hours to complete one. Twice a week he tries to do two strips a day so he can have weekends off, though right now his weekends are taken up with his latest book project, a compilation of “Zippy” from 1969 to the mid 1990s.

Charles Schulz once mentioned something to Griffith that has always stuck with him. “He said ‘When I die, “Peanuts” dies. That’s the way I think about my strip too. I can’t think of anybody else doing it.” 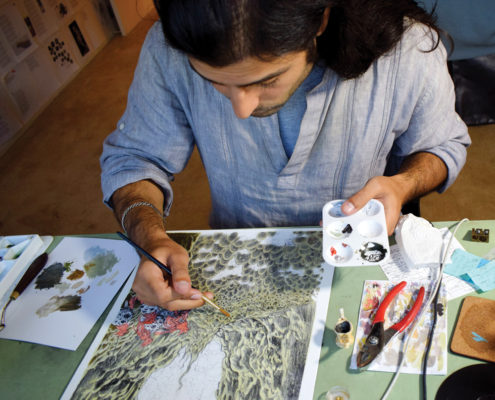 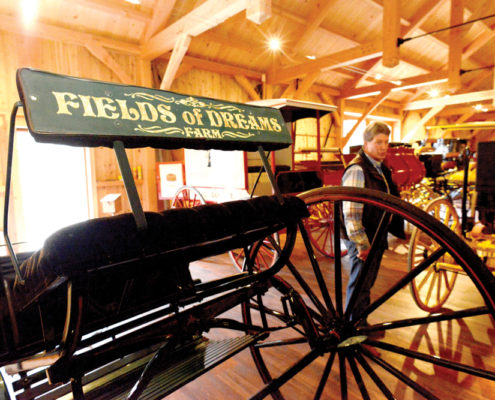 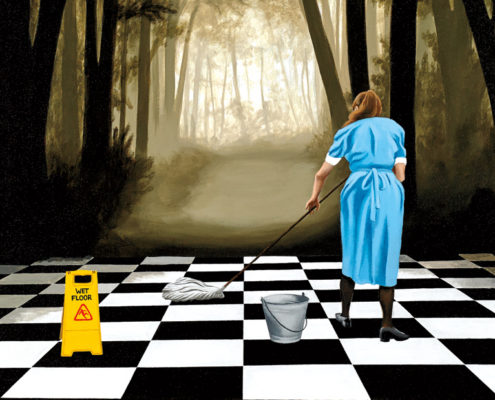 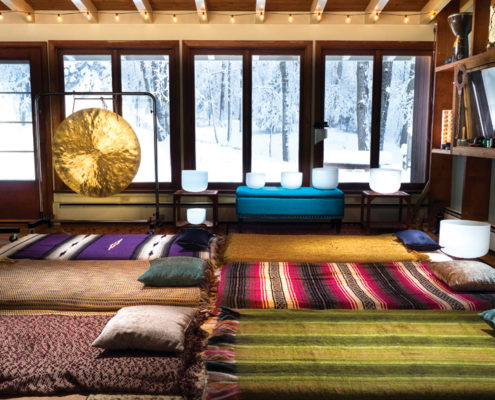 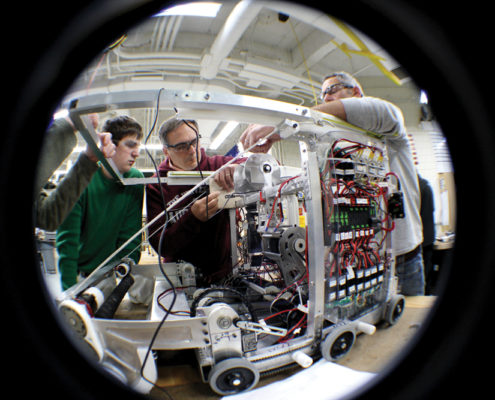 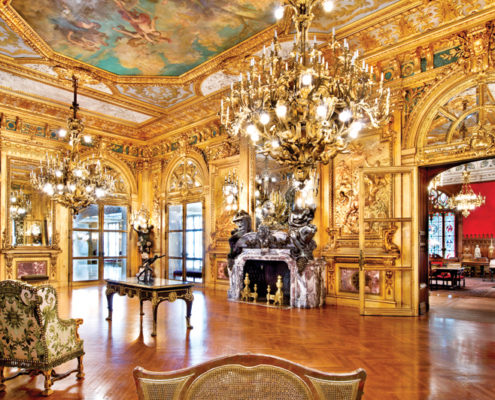 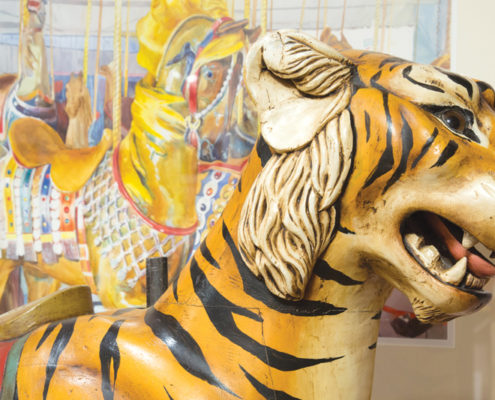 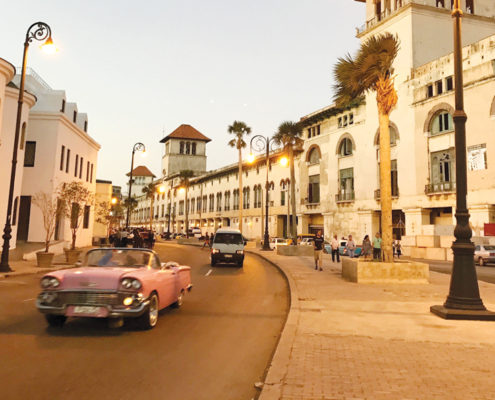 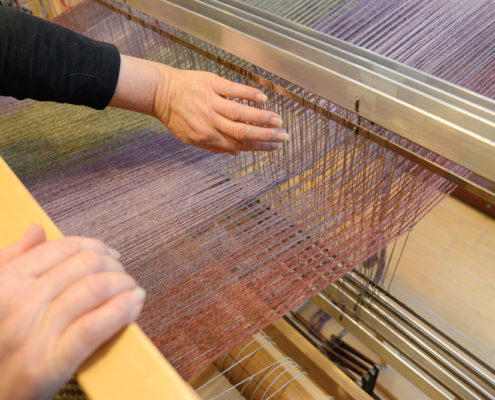 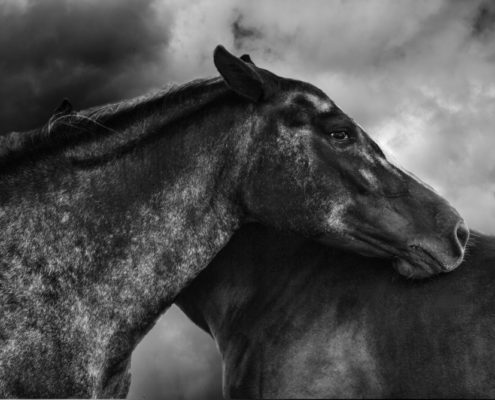 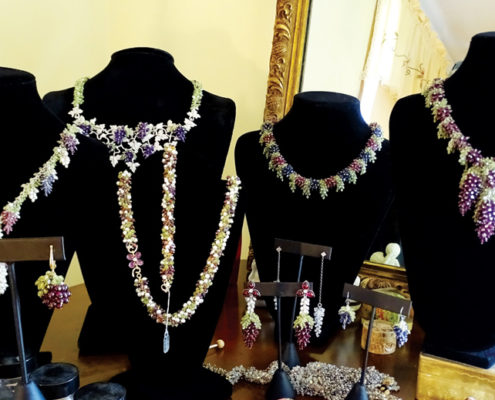 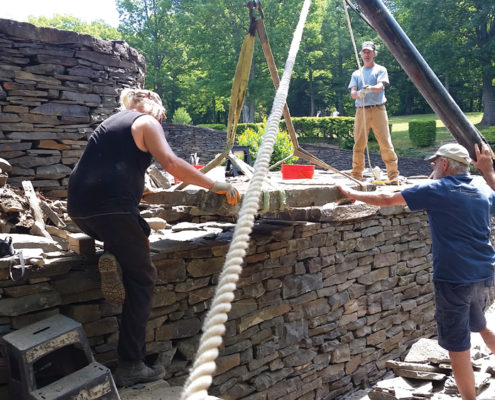 • Honoring the Past at MYSTIC SEAPORT